Jelena Dokic has crashed out of the Brisbane International 6-0 6-1 to German Andrea Petkovic in a severe blow to her confidence ahead of the Australian Open. 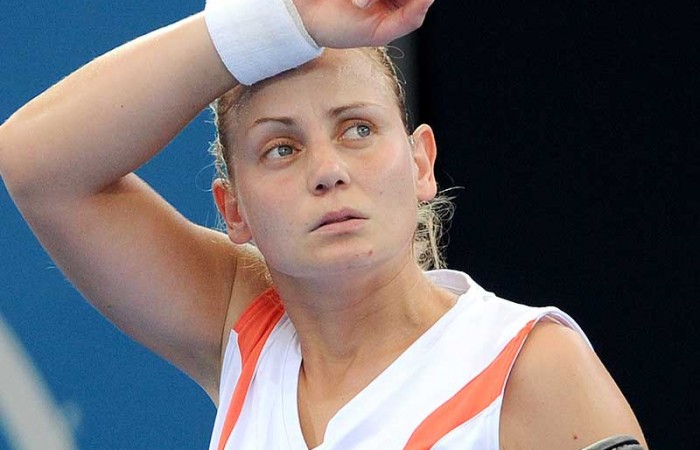 Jelena Dokic has crashed out of the Brisbane International 6-0 6-1 to German Andrea Petkovic in a severe blow to her confidence ahead of the Australian Open.

Dokic, nursing a wrist injury, lasted just 46 minutes on Pat Rafter Arena as she struggled with all parts of her game.

World No.32 Petkovic danced her signature jig at the end of the second round encounter which brought nothing but torment for Australia’s former world No.4.

Dokic had promised much better after she progressed through the first round of the tournament with a straight sets victory over Russian Anastasia Pivovarova on Monday night.

Helped by a string of unforced errors from the crowd favourite, Petkovic took the first set in just 17 minutes, icing the 6-0 scoreline with an ace.

Dokic lost 10 straight games to be 4-0 down in the second set before breaking the German, who was previously guided by Dokic’s new coach Glenn Schaap.

But the world No.138 gave the break straight back as she conceded the last of her six double faults in the sixth game.

Petkovic easily closed out the match to set up a quarter-final clash against Melbourne’s Jarmila Groth who upset top seed Samantha Stosur 6-2 6-4 on Tuesday night.

Apart from Stosur, Dokic is the third Australian woman to bow out of the tournament in the second round after Sally Peers lost 6-4 6-1 to Czech Barbora Zahlavova Strycova on Wednesday.