Jelena Dokic overcame a huge bout of nerves to start 2011 with a breakthrough victory at the Brisbane International, beating Russian qualifier Anastasia Pivovarova in straight sets on Monday night. 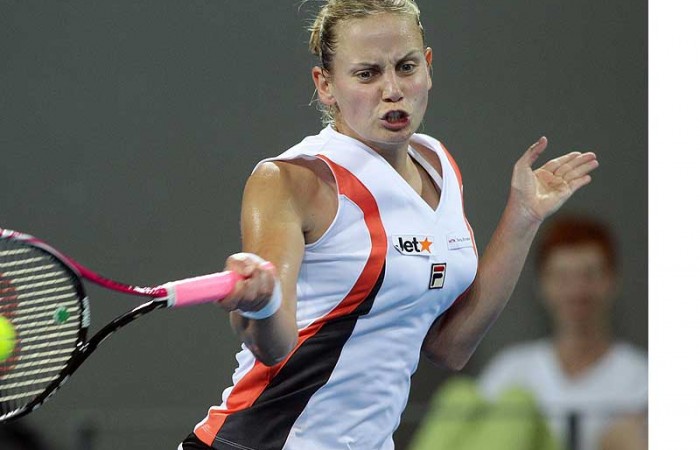 Jelena Dokic overcame a huge bout of nerves to start 2011 with a breakthrough victory at the Brisbane International, beating Russian qualifier Anastasia Pivovarova in straight sets on Monday night.

Looking for her first win in three years at the tournament, Dokic shook off stomach cramps and a shaky end to the first set to triumph 6-4 6-3.

The 26-year-old was extremely relieved after a 78-minute slugfest where she produced the groundstrokes and power for which she was renowned in her younger years.

Dokic raced to 4-1 in the first set but ran into troubles on her serve and also stumbled badly in failing to convert four set points.

Serving for the set at 5-4 and 40-0, the former world No.4 let Pivovarova off the hook by volleying a ball on the baseline and then had to fight hard to save two break points.

Her big serve returned in time to close out the set, managing then to rattle the confidence of her lanky 20-year-old opponent who she broke in the opening game of the second set.

Pivovarova continued to fight hard and mostly matched it with Dokic from the baseline, but suffered the ignominy of serving four straight double faults to lose her serve again at 2-4 down.

The Serbian-raised Dokic failed to hold serve to close out the match but broke again.

“I was a little bit nervous, I was a lot nervous actually,” she said. “I had cramps in my stomach before the match.

“It was really good to win here on my third time.”

Dokic was also relieved she got through the match with no problems from an injured wrist she’d kept under wraps for three days.

The world No.138 injured it in practice on Friday and admitted she’d been extremely concerned it may have derailed her summer campaign.

“I mis-hit a ball and it was very swollen after training,” she said.

“I was very worried about the forehand, that’s what it was hurting on in a couple of practices.

“Yesterday was the first day it was good and today it was much better.”

Dokic will now face German Andrea Petkovic, who was previously guided by her new coach Glenn Schaap, in the second round.

Another win would set up an all-Australian quarter-final against the winner of Tuesday night’s centre court showdown between Samantha Stosur and Jarmila Groth.