Tomic out to build bridges

Polarising talent Bernard Tomic admits he needs to build better relationships in Australia, and is desperate to do that by earning a Davis Cup berth alongside Lleyton Hewitt. 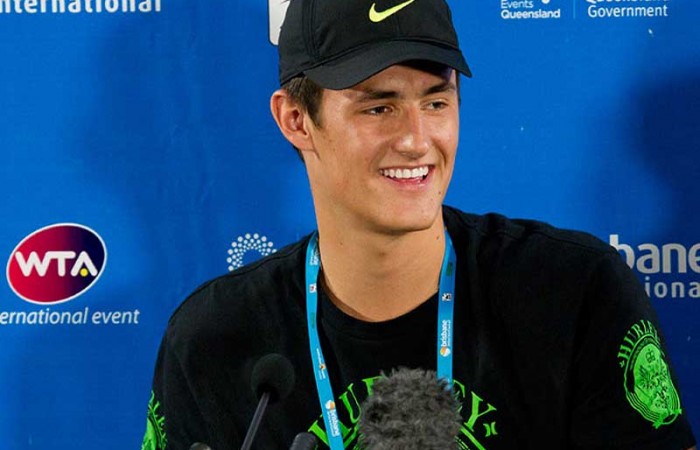 Polarising talent Bernard Tomic admits he needs to build better relationships in Australia, and is desperate to do that by earning a Davis Cup berth alongside Lleyton Hewitt.

Tomic has been loved and loathed at the same time in his short senior career which was blighted by a lengthy row between his camp and Hewitt that stretched out almost a year.

A champion junior, the 18-year-old has yet to reach close to his potential and at 208 in the world rankings hasn’t rewarded Tennis Australia for their support since making his pro-tour debut exactly two years ago.

He has returned to the scene of that debut, a gallant loss to Spaniard Fernando Verdasco, this week, grateful for receiving an 11th-hour wildcard to the Brisbane International’s main draw.

TA’s decision not to award him an early wildcard, and only confirm one once an injury put paid to the hopes of the country’s hottest current junior, Jason Kubler, showed the governing body want to see him do more to earn his spurs.

And to Tomic’s credit, he admitted he knows that’s just what he has to do to regain some faith and strike some support.

The Gold Coaster, who again put himself in a sticky situation by withdrawing from last month’s Australian Open wildcard playoffs, said he’d already mended his fractured relationship with Hewitt.

“It’s been really good,” he said. “I spoke to him about six months ago, I haven’t heard from him since but I think we’ll get along.

“I’ve got to build a relationship here in Australia. I think I’m real good with him now.

“We’ve had our problems in the past but I think it’s all in the past.”

Tomic played Davis Cup against Chinese-Taipei this year when Hewitt was injured, but he’s determined to play his way into a full-strength outfit to team up with the former world No.1.

He denied he’d taken a Brisbane wildcard for granted and said he’d been looking forward to slugging his way into the main draw through qualifying.

Criticised for pulling out of the Open playoffs, Tomic admitted he did train on the day he withdrew but only in one last-ditch failed bid to prove his fitness.

“I had a virus at the time,” he said. “I gave it a shot, like anyone going to work, you want to see if you can do it.

“It was unfortunate I didn’t go to the play-offs as I’ve felt good the last two years playing there.”

Still coached by his Croatian-born father John, Tomic has an improvement on two previous second round appearances at the Open high on his 2011 wish list.

“But I’m focused on this (Brisbane) tournament here. I want to push myself as much as I can,” he said.

“I’ve lost first round the last two years but always felt like I could do better.

“But I think I’m playing good right now and if I get the right draw I can do well here.”