Jelena Dokic and Peter Luczak, both finalists at the Australian Open Play-off, have been awarded wildcards into the main draw of Australian Open 2011. “I had a pretty good play-off considering I didn’t play a match in over two months, it was a good practice run for me and I’m very happy to receive the wildcard. I did play well and I got better… 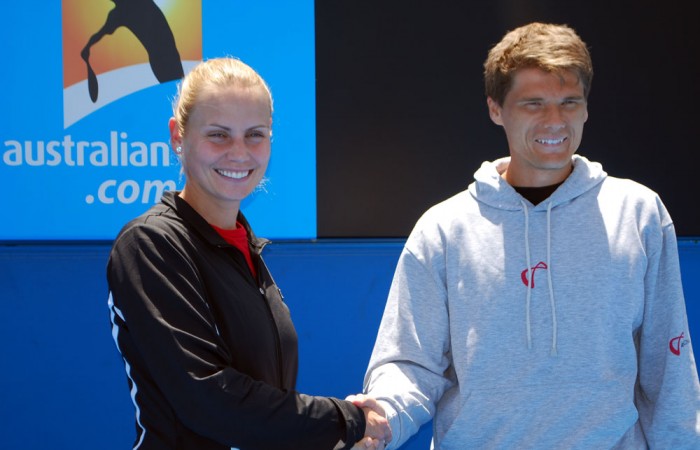 “I had a pretty good play-off considering I didn’t play a match in over two months, it was a good practice run for me and I’m very happy to receive the wildcard. I did play well and I got better with each match,” Dokic said when asked about her form in the Australian Open Play-off last week.

“There was a big difference between my first match and my semis and finals and I was disappointed to have lost the final when I was winning so easily and everything was going so well. But I should have kept my nerve … [won] a couple more games … the rain didn’t help, it was a little bit difficult, but I played a very good semifinal, I played a good final and I’ve just got to try to build on it. Overall I’m happy with my whole performance that week.

“Obviously the [Australian Open] draw will be very tough. You’ve got to go match by match, you never know what can happen. There’s always been kind of underdogs that have come [through], especially early in the year as everyone still coming off their breaks, their off seasons. My goal is not to just do well at the Australian Open, it’s to play well.”

Peter Luczak is treating his wildcard as an early Christmas present.

“Todd Woodbridge called me last night to let me know, and I’m stoked, really pumped about getting a wildcard and playing another Australian Open. I feel as though all my Christmases have come at once,” Peter Luczak said.

“I think last night my wife and I were high fiving when I found out the news, so it’s pretty special. I told my parents as well; they were pumped for me. I’ve got a lot of friends and family out here so I can’t wait to get out there.

“It’s nice knowing my summer is set, I can play Brisbane, I can play Sydney, hopefully get a few wins under my belt and have a bit of confidence coming into the AO.

“It’s huge,” Luczak said when questioned on having a possible home ground advantage. “Especially if it’s pretty hot out here. A lot of the guys are coming from the winter, coming from the US or from Europe, so it’s nice to get a nice hot day, especially with a big crowd behind you it can definitely play a massive role.

“I know coming out on to this court [Margaret Court Arena] a couple of times, I’ve had the national anthem and Waltzing Matilda, people are singing, and carrying on … as soon as I walked out the adrenalin kicked in and you’re not going to leave anything on the court when you’ve got that kind of support behind you.”

Australian Open 2011, presented by Kia Motors in association with ANZ, Jacob’s Creek and Rolex, will take place at Melbourne Park, Melbourne, from 17 to 30 January.

Tickets are now on sale and available through Ticketek at www.ticketek.com.au.

The great value $29 Australian Open ground pass gives fans access to all the outside courts and free entertainment on Grand Slam Oval™ and in Garden Square.