Rogowska through to Play-off final

Update 2:50 pm. Amidst showers and sunshine today at Melbourne Park, Olivia Rogowska was first through to the final of the Australian Open Play-off, accounting for Sydneysider Sophie Ferguson 7-6(4) 6-4. 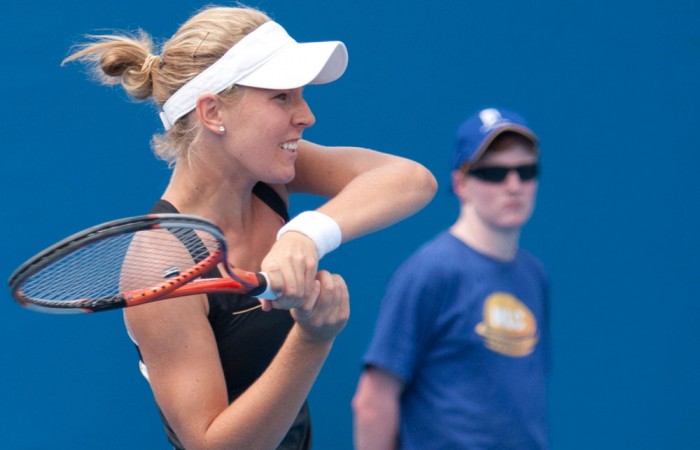 Update 2:50 pm. Amidst showers and sunshine today at Melbourne Park, Olivia Rogowska was first through to the final of the Australian Open Play-off, accounting for Sydneysider Sophie Ferguson 7-6(4) 6-4.

In a match that certainly featured its share of unforced errors, Rogowska appeared the more confident of the two, breaking her older opponent to lead 3-1 in the opening set. Ferguson was afforded some respite from the Rogowska onslaught at 2-1, when she called for the trainer to treat what appeared to be some nagging blisters on her foot.

The treatment appeared to have a positive effect on Ferguson’s movement; her more nimble frame breaking back for 3-2. However, as the two exchanged blows from the back of the court, it became increasingly evident that the match was mainly on Rogowska’s racquet. She broke once again to lead 4-2, and looked the strongest of the pair. Yet just when the Victorian appeared ready to fully grasp the opener, Ferguson broke back for 4-3 following a succession of forehand errors from Rogowska.

Erratic play from both girls continued throughout the remainder of the opening set, with Rogowska unable to close it out at 5-4 and 6-5. A backhand volley from Rogowska that found the net brought the set to a tiebreaker, in which the Victorian gained the early ascendancy.

Down 4-2, Ferguson won perhaps the longest rally of the set, making a final attempt to snatch the opening set. At that point, the teasing skies finally opened up to force a brief interval in the tiebreak. When the two returned, Rogowska was the more confident, eventually closing out the tiebreaker 7-4.

In the second set, the Victorian broke in the opening game with a blistering backhand winner down the line. Soon after, both girls held for the first time in the second to level at 3-3, promising a close finish.

However, errors from the Ferguson forehand paved the way for the Sydneysider’s downfall, as Rogowska pounced on her opponent’s errors to lead 5-3 and soon after close out the match 6-4.

After the match, Rogowska credited her mental toughness and focus throughout the testing conditions as the decisive factors in her win.

“Very tough conditions, it was really windy, the rain, the sun in my eyes so it was really tough but I stayed mentally tough and I played well in the important points and I’m glad I executed.

“I was really ready to fight hard, I ran really hard; so I fought really hard and I’m glad it paid off.”

Looking ahead to tomorrow’s encounter, the teenager was certainly enthusiastic about the prospect of facing either Jelena Dokic or Alicia Molik.

“I’m really excited, I mean the next semifinal Jelena and Alicia – I can’t pick the winner, it’s going to be a really tough match, so definitely going to stick around and watch it and find a way to beat them tomorrow.”

When asked if she had a preference in tomorrow’s final, Rogowska tentatively admitted Molik would be her opponent of choice.

“They are both so tough, I really can’t pick, but probably Alicia because I know a bit more about her game, but either one is going to be really tough.”