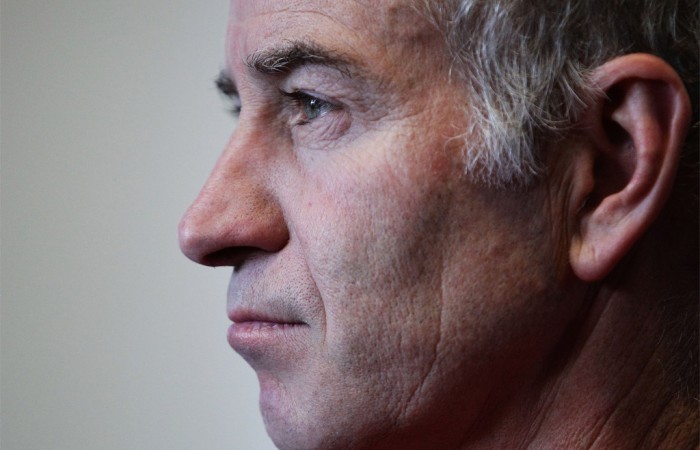 Seven-time grand slam winner McEnroe is one of the major attractions of the eight-man Champions Downunder tournament starting at Sydney Olympic Park on Wednesday.

Laconic McEnroe, who captivated fans with his intoxicating tennis and volatile behaviour, produced plenty of witty one-liners and some interesting opinions at Wednesday’s press conference in Sydney.

He found it hard to comprehend that such a historically successful tennis nation like Australia had no one ranked in the men’s top 50, with veteran Lleyton Hewitt at 56, the only local male in the top 100.

“When I grew up I idolised (Australian Rod) Laver and (legendary Australian coach) Harry Hopman was around and he was my inspirational leader and I heard all these war stories about all these incredible (Australian) players,” McEnroe told reporters.

“It’s unbelievable to think there’s not even one guy in the top 50 right now.

“It will be interesting to see how much longer he wants to go on, I’m sure he’s not the type of person that is happy being 56 in the world,” he said.

McEnroe noted Australia was in “the minor leagues” of the Davis Cup after again missing out on qualifying for the World Group, and wished Rafter luck in his new job as Australian captain.

“I think Patrick Rafter is a fantastic appointment, absolutely first class. There’s not a single guy on the tour that doesn’t like this young man, he’s a mate’s mate as you say in Australia.

McEnroe doubted Roger Federer would regain the No.1 ranking from Rafael Nadal, but believed the Swiss superstar could win a couple more majors.

“Certainly at Wimbledon he’s going to be a threat for the next few years at least,” McEnroe said.”

“I don’t think he’s declined that much, but guys have to get better. I think some guys like Nadal have gotten better and he is younger and he’s got youth on his side.”

“I do believe with the state of the game now on the women’s tour, that she is one of the best and that she thinks she can grab a slam, I don’t think there’s anybody consistently better than her,” Cash said.

“Obviously Serena (Williams) at her best is too good for anybody, but she’s not always playing, so I think Sam has got a great chance.”