Kim Clijsters has upstaged world No.1 Caroline Wozniacki to capture the WTA Championship in Doha. 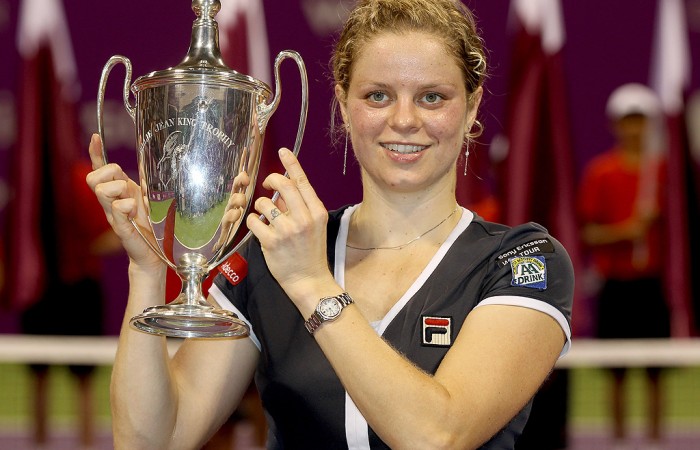 Kim Clijsters has upstaged world No.1 Caroline Wozniacki to capture the WTA Championship in Doha.

Clijsters overcame a mid-match lapse to score a 6-3 5-7 6-3 win in Sunday’s final to become the fifth player in the tournament’s 38-year history to snare three season-ending titles.

The 27-year-old Belgian went back-to-back when the event was held in LA in 2002-03 and only all-time greats Martina Navratilova (8), Steffi Graf (5) and Chris Evert (4) have won more tour championships.

Clijsters’s victory earned her a fifth title of the year – one less than Wozniacki’s tour-best half-dozen – and 40th of her career and solidified her season-ending ranking of No.3 in the world behind the Dane and Russian Vera Zvonareva.

Making her victory even more meritorious was the fact this was Clijsters’s first tournament back since having moles removed from her feet after winning her third US Open crown six weeks ago.

Clijsters beat Wozniacki by generally doing everything better than what the Dane supposedly does best.

Wozniacki is renowned as the premier defensive player on tour but in reality Clijsters is superior in that department and also delivers more powerful groundstrokes off both wings.

The tennis supermum took charge of the final from the opening point, breaking Wozniacki in the very first game of the match.

Clijsters – who escaped shaken but otherwise unscathed from a car crash before her semi-final win on Saturday over Australian Samantha Stosur – wrapped up the first set in 54 minutes and looked in total command leading 4-1 in the second.

But aided by a lapse from Clijsters, Wozniacki clawed back to get the match on level terms after winning seven of the next eight games.

The youngest year-end No.1 since Martina Hingis a decade ago, 20-year-old Wozniacki had all the momentum after grabbing a break to lead 1-0 in the deciding set.

Clijsters, though, stayed cool and broke straight back, then surged to a 5-2 lead before closing out the match after two hours, 19 minutes.

“When we started the third set, I said: ‘Okay, this is going to be the last set of the year, give yourself 200 per cent and we’ll see how it ends,” Clijsters said.

“But it was a very tough match. I was able to turn it around and just really focus on getting my game back that made me lead in that match until halfway through that second set.”

Gracious in defeat, Wozniacki said the classy Clijsters was a worthy winner.

“In the third set, it was very close. She played really well, especially in the important moments,” the top seed said.

“It’s so easy to say, I could have done this different, that differently. But I gave my all today.

“Definitely the [difference in] experience mattered a little bit. I did my best out there and today it wasn’t enough.”