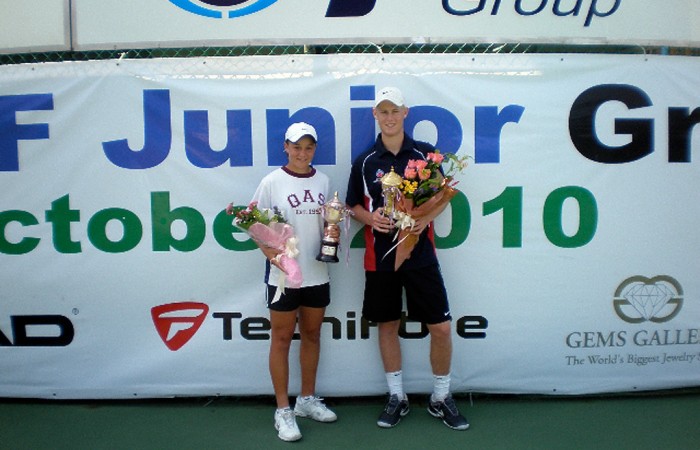 Barty, currently holding an ITF junior ranking of 407, had to qualify for the event before storming through the main draw without dropping a set.

Fourteen year old Barty has had an outstanding year, achieving a 17-1 win-loss record in ITF 18/u events, representing Australia and remaining undefeated in singles in both14/u and 16/u international team events, World Junior Tennis Competition and Junior Fed Cup, and training with Darren Cahill and Gil Reyes in Las Vegas.

Earlier this month Barty achieved her first senior points after reaching the semifinals of the Pro Tour event in Mount Gambier with wins over older and more experienced players such as top seed Arina Rodionova (RUS) and fellow Australian Sophie Letcher. Barty now has a professional ranking of 717.

Ashleigh Barty is coached by Scott Draper at the National Academy – Brisbane, and her private coach Jim Joyce.

This is Saville’s third tournament back after a frustrating four months on the sidelines with injury.

“It has been a long and tough road back from injury and to come away with a win this week means a lot to me,” Saville said after the match.

“Spending so much time out of the game I love was very difficult to cope with, but I feel as if it has made me even more determined and hungry for success. In the semis [against fellow Australian Sean Berman] I was losing 5-3 in the third set with him serving at 40-0. I came back and won that match 7-5 in the third set, and then the final 6-3 6-2.

“I go to Korea this week and then I’m back in Australia for the rest of the year where I will play all the Pro Tour events and then December Showdown,” Saville continued.

Saville will be hoping to recapture his momentum from the first half of the year when he won his first ATP points, achieving the distinction of being the world’s second highest ranked 16-year-old.

Luke Saville is a member of the AIS Pro Tour Program and is coached by Ray Ruffels.