McEnroe and Lendl to meet at WTC 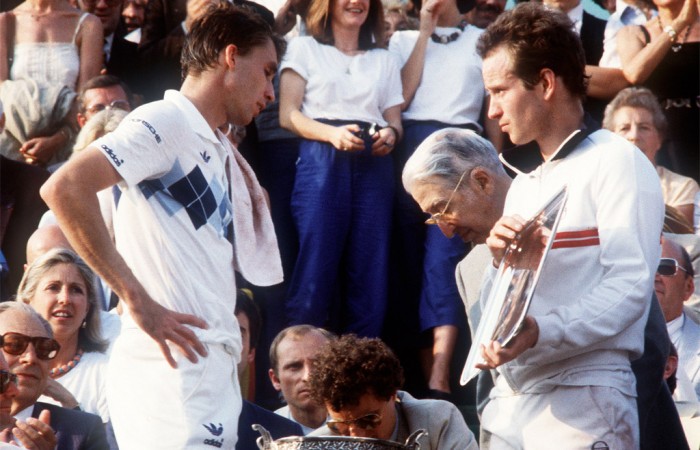 Former No.1 and 17-time Grand Slam winner John McEnroe and his former No.1 rival Ivan Lendl will headline the World Tennis Challenge (WTC) at Adelaide’s Memorial Drive from 11 to 13 January 2011.

“McEnroe’s initial motive to return to Adelaide was to take out the victory for Team America as Jim Courier did in 2008. However, with the recent addition of Lendl to the draw, McEnroe’s primary goal will no doubt be to defeat Lendl,” Woodforde said.

“The McEnroe and Lendl showdown has added a new dimension to the competition. It has reiterated that the WTC is a leader in its field and all eyes will be on this highly anticipated match.”

“I expect tension will be high in the locker room prior to his match!” Woodforde said.
McEnroe said he is excited to be returning to Adelaide with the aim to win the team championship title and take down Lendl.

“I’m so thankful he’s coming back for this. I thought he’d never play again,” McEnroe said.

McEnroe and Lendl will be joined by fellow legends of the game, Pat Cash and Henri Leconte, and current ATP players Michael Llodra and James Blake.

Woodforde is excited that Blake and Llodra are returning to Adelaide to participate in World Tennis Challenge.

“Both James [Blake] and Michael [Llodra] are thrilled to be coming back to Adelaide after previously playing in the Australian Men’s Hardcourt Championships. The relaxed atmosphere, three solid matches before the Australian Open and the opportunity to play with some of their heroes were the major reasons these players have chosen Adelaide over some of the other options on the table,” Woodforde said.

“It is great to have Michael Llodra coming back to play in Adelaide as he is still technically the defending champion of our ATP event. Michael was the last person to win the ATP event in Adelaide so he is an absolute quality player. Furthermore, he has led France to the Davis Cup final this year so we are thrilled to have him play for the European team.

Llodra, ranked world No.32, will pair with Henri Leconte for the European Team in WTC 2011 and Woodforde believes they could take out the title.

“The Europeans are a quality team and I know these guys are looking forward to playing with each other. I think they are a real chance for this year’s title.”

However, Llodra who will play the Davis Cup final for France later this year, believes the competition will be tough at WTC in 2011.

“Both Henri and I play an all-court game and I think we will complement each other very well as a team. Both the USA [2009 winners] and Australian teams [2010 winners] were strong teams so I am under no illusion that the competition will be fierce in Adelaide,” Llodra said.

James Blake will also return to Adelaide for the first time since 2007 to partner McEnroe.

The former world No.4 finished last year out of the top 25 for the first time in five years due to a knee injury but is a former finalist of the Tennis Masters Cup and a quarterfinalist at both the Australian and US Open.

“Last year we had a great day with corporate teams participating in both the premier and social divisions. What we didn’t expect was the significant interest from the corporate market with teams coming from interstate and some companies recruiting former professionals to participate on their teams.”

This year’s WTC Corporate Challenge will be played on Monday 10 January in the afternoon with the finals to be played at night at Memorial Drive with some of the WTC players as special guests.

“Our aim with WTC is to showcase an elite tennis event that is competitive, entertaining and relaxed. We also hope to continue to combine this with Australia’s premier tennis participation event making Adelaide one of the most unique tennis festivals in the world.”