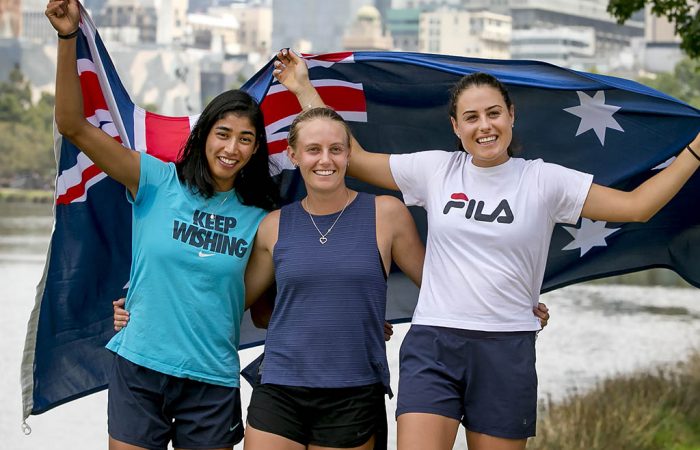 As a player who is always quick to acknowledge the team element of her individual success, it’s perhaps only natural that Ash Barty would take a collective view amid her best-ever start to a season.

“We have an amazing group of girls. We really do,” Barty said of Australian women’s tennis on her way to a first Grand Slam quarterfinal at the Australian Open, where she led 10 local women in the singles main draw.

“I think there are a lot of girls in the fringe from 150 to 300 in the world that haven’t really dipped their toes in too many WTA events.

“And we are starting to see that now in the Australian summer. You obviously have more opportunities for Australian players to come out and play, but they have to make the most of it.

“A lot of them certainly, either through qualifying or Brisbane, Sydney, Hobart, all of these tournaments, they have kind of stepped up and played well. They have always been capable. Just needed the opportunity.

“I think we have an extremely great group of girls who work hard, who do all the right things, and now the results are starting to come.”

Certainly it was a view validated over a memorable summer, when a string of Australian women achieved important career firsts.

For Kimberly Birrell, an upset of the top-10 ranked Daria Kasatkina in Brisbane was followed by a win over higher ranked Donna Vekic at the Australian Open, ensuring her progress to the third round of a Grand Slam for the first time.

Astra Sharma was also a winner in Melbourne, the West Australian claiming some hard-gained wins in qualifying to earn entry into the first main draw of her career. There, the 23-year-old ousted fellow Aussie Priscilla Hon in the first round.

And Zoe Hives, a wildcard recipient, took just 61 minutes to dismantle former world No.30 Bethanie Mattek-Sands 6-1 6-2 for her first match win at a Slam.

As Tennis Australia’s Head of Women’s Tennis and Fed Cup coach, Nicole Pratt knows the hard work that such milestones require and equally appreciates the positive long-term impact of the players’ success.

“To have Ash Barty lead the way with a first Grand quarterfinal is just such a boost for Australian women’s tennis,” said Pratt.

“We saw it over the summer with so many of our female players achieving great results and rising to new rankings highs.”

At the end of a memorable Australian summer, Barty, Birrell, Sharma and Hives had in fact all achieved personal-best rankings. It not only provided a boost for those players, but for the many supporters who contribute to their rise.

“I’m really proud of our players,” Pratt added. “But equally proud of the coach physios, the fitness trainers everybody who works hard help them achieve that success. It’s a reward for them all.”

And with that collective approach, top Australian women are showing many shared qualities to help sustain the success. Resilience and fighting spirit were arguably most notable on home soil, as several high-profile players worked hard for their wins.

Birrell’s marquee summer started with victory in the AO Wildcard Play off; combined with her win over Kasatkina in Brisbane, progress through two rounds of Sydney qualifying and her run to the third round of the Australian Open (where she survived a tough three setter against world No.29 Donna Vekic), the Queenslander amassed a record of eight wins from 10 matches over two months.

“It’s a huge reward for all her hard work after a tough year with an elbow injury,” Pratt said of the 20-year-old. “She maybe felt like she got a little bit behind, but winning the Australian Open Play-off gave her a real confidence boost that she took into the Australian summer.”

It’s almost certainly no coincidence that Sharma, who Birrell beat in the AO Wildcard Play-off final, also struck the form of her life. Pratt notes the rapid progress since the 23-year-old graduated from Vanderbilt University only last year.

“She’s just such a fighter,” said Pratt, pointing to the Western Australian’s hard work in qualifying for the Australian Open, where she upset former world No.2 and two-time Grand Slam finalist Vera Zvonareva and saved three match points in a 7-6(7) 7-6(10) win over Irina Khromacheva.

Highlighting the strong support network that exists for Australia’s female players, Pratt laughingly related that “we were all out there for hours supporting Astra in that match”.

And others, including Barty, are also keen to help their countrywomen.

WHAT AN AMAZING STORY!

Aussie Astra Sharma is 23 years old. She's never played in a Grand Slam before. And she just defeated Russia's Irina Khromacheva in three sets, 12-10 in the third set tiebreak to book her spot in the Australian Open.@astrasharma #AusOpen #9WWOS #Tennis pic.twitter.com/BSXvaBnZ7u

“She’s a really accessible role model. It helps that (at age 22) she is really close to a lot of the girls in age,” Pratt said of the top-ranked Australian.

“And Ash loves that sense of team too. She spent a lot of time training with the other women in Brisbane and that really set them up for the Australian summer.”

Another powerful role model is Sam Stosur, who bounced back from a first-round loss in singles to claim her first Australian Open women’s doubles title with Zhang Shuai.

“What a great result for Sam. I think she can take it into her singles game too,” said Pratt. “Honestly, I’d love to see her out there for another five years.”

Pratt cites the positive example that the 34-year-old Stosur has provided to her younger countrywomen: “She’s really opened up to them, especially in these past few months. Sam has really made herself available to the younger players whenever she could, whether that was in training or in just having a chat over lunch.”

It’s a positive symbol of the wider camaraderie among Australian women, with 10 of them now ranked inside 200.

“There is just so much positivity among the group. That especially helps when they’re travelling,” said Pratt. “They can really support each other when they’re away from home and spur each other along.”

The network helps as those players target the next priorities. “Continuing to build on that success,” Pratt said of se objectives. “It’s about consolidation from here and ensuring that the Australian summer is a springboard for bigger things.”

Buoyed by their summer success, players like Birrell do so with only a positive outlook.

“I’m super-pumped for what the rest 2019 is going to have in store me,’ said Birrell.

“I feel incredibly lucky to be part of tennis in Australia at the moment. It’s going to be, I think, a really big year for the Aussies. It’s super exciting. I think it’s awesome.”

This article appears in the Feb/Mar 2019 issue of Australian Tennis Magazine.