Casey Dellacqua: back where she belongs

As she looks happily back on a stunning Australian summer, Casey Dellacqua is also looking excitedly ahead to a season of new possibilities. VIVIENNE CHRISTIE reports. 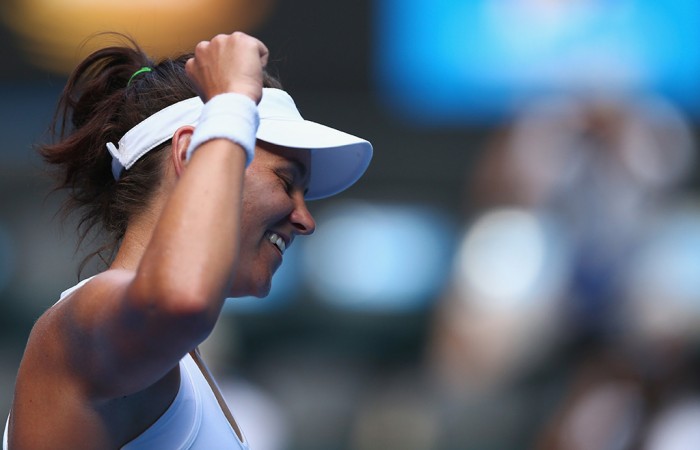 As she looks happily back on a stunning Australian summer, Casey Dellacqua is also looking excitedly ahead to a season of new possibilities. VIVIENNE CHRISTIE reports.

It’s just like the endlessly good-natured Casey Dellacqua to give the most credit to her team.

Asked at the start of the 2014 season whether she was back to playing the best tennis of her life, Dellacqua delivered a trademark smile, agreed, then provided her summary of why: full health and fitness achieved with her long time fitness trainers and a relatively new coaching relationship that’s quickly going from strength to strength.

“Obviously I’ve had a couple of surgeries over the years. It’s been tough to manage those injuries but obviously we all go through periods in our career,” she said, alluding to the shoulder injury that required a full reconstruction early in 2009 and then a foot ailment that delayed her comeback for the best part of another year.

A commitment to returning to top form meant a move to Sydney, so Dellacqua could be close to Nathan and Giselle Martin, the fitness trainers who she believes are instrumental to her success. “It hasn’t been a quick process, it’s been a gradual process over years of hard work,” she pointed out. “I’m very lucky to have them in my team.”

As she looks happily back on a stunning Australian summer and optimistically ahead to season of new possibilities, the influence of coach Shannon Nettle is also at the top of Dellacqua’s gratitude list.

“He’s been awesome,” she enthused of the former professional player, with whom she first teamed up in mid-2013. “He’s probably the reason where I am now. I’ve know I’ve done a lot of hard work but he’d guide me in the right direction and made me understand what I want to get from singles and how I want to play, and how I win matches.

“I haven’t lost too many matches since we started. I certainly feel motivated and that my singles is going in the right direction. That’s purely because of him.”

Pointing to the easy communication style of Nettle – who is known by most as ‘Stinga’ – Dellacqua notes his fine-tuned understanding of the right scheduling, partly developed in the years he spent coaching fellow Australian player Peter Luczak in the latter stages of his career. “Just the little things,” she said. “I’d certainly say he’s one of the best coaches going around at the moment.”

But ask either trainers or coach, and they’re equally quick to point out the work ethic and positive spirit that has helped Dellacqua recover from those career-threatening health problems.

Certainly they were all on show in Australia, where Dellacqua’s season started earlier than most with victory in the pre-Christmas Australian Open play-off at Melbourne Park, earning her the wildcard that would help her shape the season. It was followed by victories over high-ranked opponents in both Brisbane and Hobart – and then another stunning run at the Australian Open, Dellacqua eventually equalling the fourth round appearance she’d also achieved in 2008.

Wins over former world No.2 Vera Zvonareva, 18th seed Kirsten Flipkens and world No.56 Jie Zheng made her the most successful local singles competitor in Melbourne, the stirring run ending with a three-set loss to the surging Eugenie Bouchard.

It was a performance that reminded Dellacqua of what she most loved about tennis, especially considering that it occurred in front of her favourite home crowds. “It’s nice to have people behind you. I don’t feel any more pressure or anything playing in front of the crowd. You can just tell they want you to do well, so I just want to play my best and up a good match,” she said. “The crowd really helped me.”

Having jumped from outside the top 100 to No.80 after the Australian Open, Dellacqua is also tremendously encouraged by the launching pad she’s created for the remainder of the season, following some recent – and tough – periods of contemplation.

“I’ll be honest. About three months ago, after the US Open, I remember having a conversation with my coach in Tokyo,” she said. “I qualified there. But I was 180. It was just a matter of like ‘Do I want to continue to really work hard and play singles?’. We had all those conversations. And my answers were always ‘Yeah, I want to do it, yeah I want to work hard’.

You can read the full feature on Dellacqua in the February “Big Game” issue of Australian Tennis Magazine.