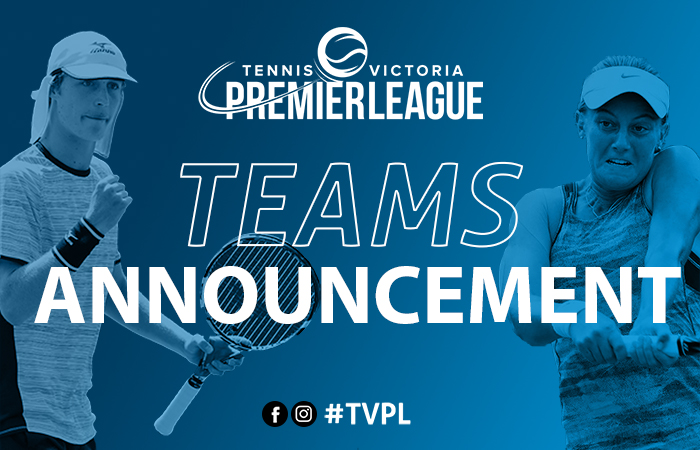 The 2019 Tennis Victoria Premier League season is set to begin on Saturday 9 November, with all squads now finalised for the state’s highest-level inter-club competition.

Tennis Victoria Premier League is the jewel in the state’s tennis calendar and sees the best men’s and women’s players represent their clubs in the hope of winning a share of $20,000 prize money.

The month-long season will see 11 men’s and women’s teams take to the courts with semi-finals and the grand final, which is scheduled for the final weekend in November, completing the top-level event. Tennis Victoria Premier League is a perfect precursor for players competing in the December Showdown and is an opportunity for fans to get a glimpse of some exciting tennis.

The 2019 season will see a new winner for the women’s competition, with three-time champions, Liston, not fielding a team this year. In the men’s competition, MCC Glen Iris Valley Tennis Club is aiming to achieve history as they enter the event trying to complete a hat-trick of titles.

Tennis Victoria CEO, Ruth Holdaway MBE, is confident the event will be played in great spirits and looks forward to seeing players, clubs and volunteers get behind this wonderful competition.

“Tennis Victoria Premier League is always a highlight on the Victorian tennis calendar. It is our highest-level competition, showcasing the incredible tennis talent that exists across the state,” Holdaway said.

“Tennis Victoria Premier League is well-placed before the incredible December Showdown and provides great preparation for the summer ahead.

“We wish all teams the very best and encourage spectators to get behind their clubs for this amazing season.”

Tennis Victoria Competitions Coordinator, Tyler Krumholz, says he is excited for the beginning of the competition.

“Tennis Victoria Premier League is always an exciting event and I am looking forward to seeing some of the best players from around Australia compete in our competition,” he said.

“I wish all teams the very best for the season ahead and encourage spectators to take advantage of some high-quality tennis.”

In addition to the team glory and prize money on offer, individuals will also be vying for the coveted Ace Awards and prestigious Paul Arber Memorial Awards. Teams that host the best round have the chance to win the Community Engagement Award. All awards will be presented on Grand Final Day.