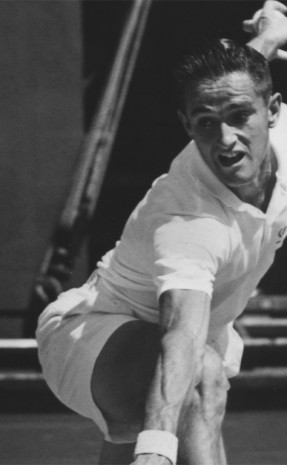 In 1957, Mal Anderson was the first unseeded player to win the US Championship. In 1958 he made the finals of the US and Australian championships, but lost both to Ashley Cooper. Anderson started to play tennis at the age of eight and became serious about the game in his teenage years. He represented Australia in Davis Cup in 1957, 1958, 1972 and 1973 (Australia won in 1957 and 1973). A rangy serve-volleyer, Anderson was at his peak in 1957-58, reaching a career-high ranking of No.2. In doubles, he captured his first Grand Slam title at the 1957 French Championships, with fellow Queenslander Cooper. But as he turned professional in 1959, it would be 16 years before Anderson tasted major doubles success again, this time at the 1973 Australian Open alongside John Newcombe. At age 36, and 14 years after his first Australian final, Anderson was runner-up to 37-year-old Ken Rosewall in the ‘golden oldies’ Australian Open final of 1972.

Malcolm Anderson in the news