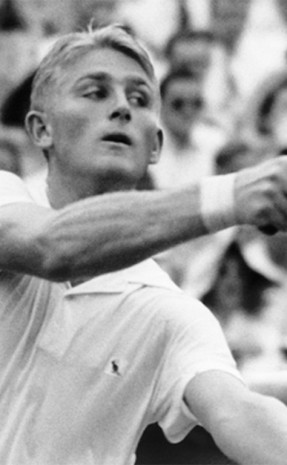 Admired for his dashing, attacking play, Lew Hoad was a feared foe on the court. Pancho Gonzalez was in awe of Hoad’s talent: “When Lew’s game was at its peak nobody could touch him.” In 1956 Hoad came within a match of completing the Grand Slam, but was defeated in the United States final by his “tennis twin”, Ken Rosewall. He had one last crack at the Grand Slam in 1957 (winning only Wimbledon), before turning pro in 1958. Hoad and Rosewall formed a formidable team in Davis Cup, the two 19-year-olds successfully defending the Cup in 1953 against the Americans. Between 1952 and 1956 Hoad was involved in four Davis Cup victories, all against the United States. Back pain forced him to cut short his career in the 1960s.

Lew Hoad in the news