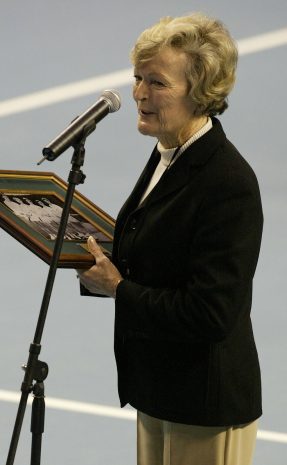 Jan O’Neill’s long and successful association with the Australian Open began early, when she won back-to-back girls’ singles titles at the tournament’s junior championships in 1958 and 1959.

She continued her winning ways on home soil in mixed doubles, winning the 1960 and 1961 Australian titles with South Africa’s Trevor Fancutt and Australian Bob Hewitt respectively.

O’Neill was a two-decade stalwart of the Australian Open, with her last appearance coming in 1977 as a 35-year-old when she fell in the second round of the singles to No.1 seed Dianne Fromholtz.

Yet she also enjoyed a fruitful career abroad, advancing to the singles quarterfinals at all other Grand Slam tournaments — four times at Roland Garros alone — and appearing in the Wimbledon doubles final of 1961 in tandem with Court.

O’Neill played Fed Cup in 1963 and won all three of her singles rubbers to help Australia advance to the final in the inaugural year of the competition.

Bud Collins wrote in The Age in 2005 that Lehane possessed “the first female double-handed backhand at the upper level”.

In 1982, at age 40, she reached the WTA final in doubles in Austin, Texas, the latest playing achievement in a career spanning almost 25 years.

She was inducted into the Australian Tennis Hall of Fame in 2018.

Jan (Lehane) O'Neill in the news