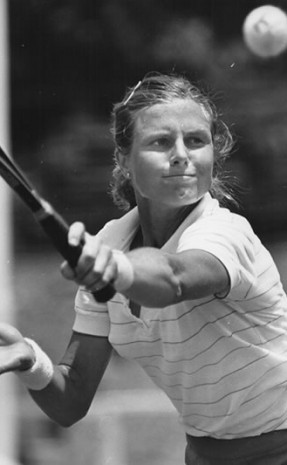 Left-handed Balestrat (nee Fromholtz) started playing tennis at the age of seven and joined the WTA tour at age 16.

A Fed Cup player from 1974 to 1983, she held an outstanding win-loss record of 35-11. She was part of a successful Australian team which reached seven finals and that would win the competition in 1974 in Naples.

She was absent from the tour between 1981 and 1982 due to a car accident and retired at the 1981 US Open, but after 15 months Balestrat was eager to play again.

Without a ranking, she received two wildcards and struggled through 1984 in qualifying. However, she made it back through the ranks to reach world No.21 in 1986.

At Wimbledon 1987 she reached the quarterfinals, losing to Navratilova. In 2004 she won the Australian Open Mixed Doubles Legends’ event with Geoff Masters, and was a three-time finalist (1998, 1999, 2003) with Fred Stolle.

Balestrat finished her career with 30 singles titles and 19 doubles titles.