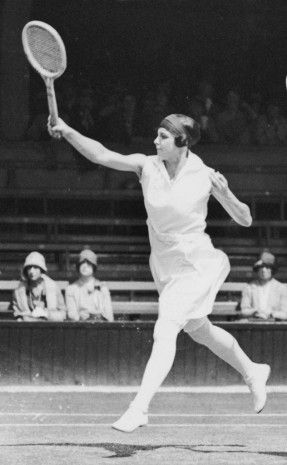 Daphne Akhurst captured five Australian singles and doubles titles and the mixed four times, an achievement that was unsurpassed until 1951 when Nancye Bolton won her sixth Australian title. Born in the Sydney suburb of Ashfield in 1903, Akhurst showed promise as a young pianist. She studied at the State Conservatorium of Music and become a music teacher but it was her achievements on court that she is best known for. In 1925 Akhurst was part of the first Australian women’s team to travel overseas. She competed at Wimbledon and made the quarterfinals. In 1928 she returned to the All England Club and reached the semifinals in singles and doubles, and the final of the mixed doubles. At home, Akhurst enjoyed an unprecedented run of success, winning five women’s singles titles at the Australian Championships between 1925 and 1930. An immensely popular champion, Akhurst died of an ectopic pregnancy at the age of 29. The winner of the Australian Open women’s singles final is presented with the Daphne Akhurst Memorial Cup.

Daphne Akhurst in the news