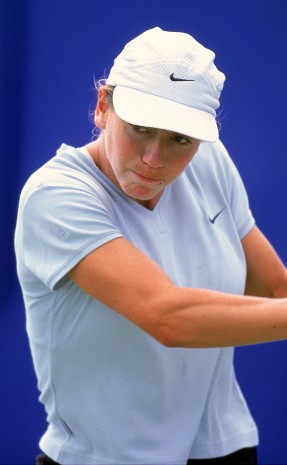 Annabel Ellwood was a top Australian player throughout the 1990s. She won nine ITF singles titles and 14 doubles titles. Her highest singles career ranking was No.57 in April 1997, and in doubles she reached No.60 the same year.

She was a quarterfinalist at Hobart and Salt Lake City in 1997, and a semifinalist at the Japan Open. She competed in Fed Cup for Australia from 1997 to 1998.

Annabel was taught how to play by the eldest of her four brothers, Jon. Another brother, Ben, also competed on the men’s pro circuit.

In juniors, she reached the final of the 1995 Australian Open and the US Open. Since last playing at ITF level in 2004, Ellwood has worked at the Australian Bureau of Statistics and, in September 2010, gave birth to a baby boy, Paul James Parolo.

Annabel Ellwood in the news