Capping an impressive run of form on tour, Heath Davidson claims a clean sweep of singles and doubles titles at the Swiss Open in Geneva. 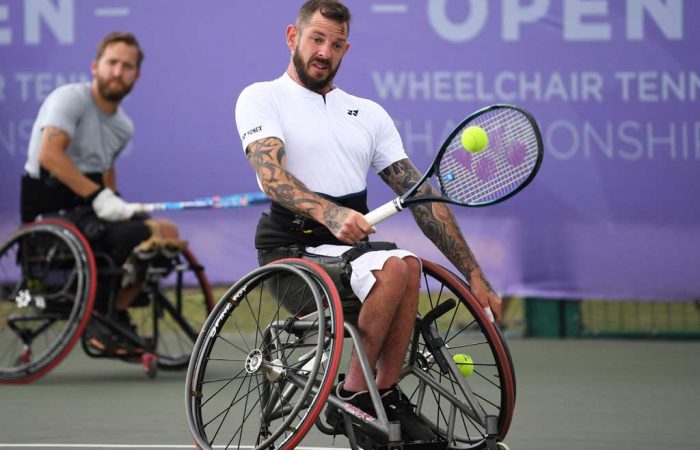 Australia’s Heath Davidson is celebrating a first clay-court singles title, with victory at the Swiss Open in Geneva. The 35-year-old also combined with Canada’s Robert Shaw to lift the quad wheelchair doubles trophy at the $30,000 tournament.

Davidson was flawless in his singles campaign in Switzerland, defeating Japan’s Kei Usami in straight sets before a 6-0 6-0 victory over Brazilian Ymantu Silva in the semifinals.

In a face-off between the No.1 and No.2 seeds in the final, Davidson defeated top-seeded American David Wagner 7-6(5) 6-4 to claim his first title at this level.

Davidson and Shaw overcame the Korean-American duo of Kyu-Seiung Kim and Wagner 6-4 7-5 in the doubles final.

Heath def David Wagner in the Quad Singles (7-6(3), 6-4) and teamed up with Robert Shaw in the Quad Doubles to def Kyu-Seung Kim and David Wagner (6-4, 7-5). #WheelchairTennis #ParaSport pic.twitter.com/jiRr9unOtu

A clean sweep in Geneva caps an impressive period for Davidson, who combined with Silva to finish runner-up in the Roland Garros quad doubles tournament in June.

After reaching the Wimbledon quad singles semifinals in his All England Club debut, Davidson was runner-up to Great Britain’s Andy Lapthorne at the British Open.

“I’m playing really good tennis at the moment, coming off the back of the French tour,” he told tennis.com.au at Wimbledon. “It’s probably the best tennis I’ve played since I came back to tennis.”

While buoyed by his own progress as he looks towards the upcoming US Open, Davidson is also pleased to note parallel progress in wheelchair tennis.

It includes a 40 per cent increase in prize money at Wimbledon, and the US Open staging junior wheelchair tournaments for the first time.

“We’ve got three Australian boys that have qualified, so that will be cool to have the young kids over there,” said Davidson, who has carefully followed and supported the progress of those young players, Riley Dumsday, Saalim Naser and Benjamin Wenzel.