Nick Kyrgios: An opportunity to cherish

As he prepares for a first Grand Slam singles final against Novak Djokovic at Wimbledon, Nick Kyrgios has a new outlook and a new milestone in sight. 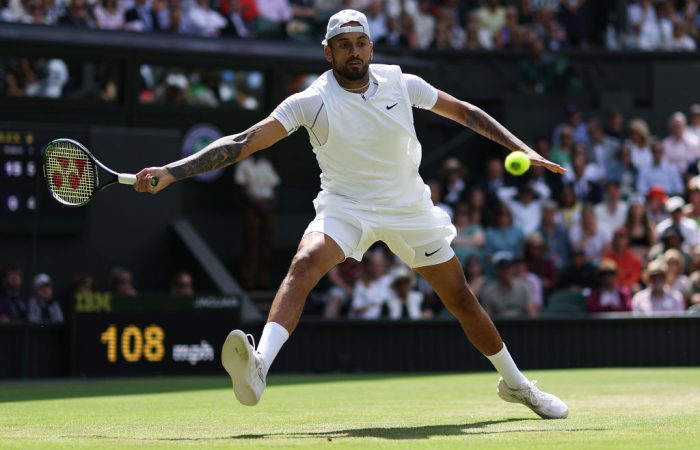 There’s the underarm serving, the familiar trick shots and the frantic energy as he moves at a rapid-fire pace between points. But if it’s the same old Nick Kyrgios contesting an eighth Wimbledon main draw at the 2022 Championships, the Australian is also a new version of himself.

“I just feel like I’m more mature. I think earlier in my career if I made a third, fourth or quarterfinals, I’d be on my phone a lot, I would be engaging online a lot, would be keen to go out to dinner and explore or just do things,” said Kyrgios as he secured his place in a first Grand Slam semifinal with victory over Cristian Garin on Wednesday.

“I think everyone has the same goal in my team. That’s why it’s working. We all know what we’ve come here to do. I made it pretty known to them that I wanted to go pretty deep here and possibly even raise the trophy.

“I feel like it’s literally just been as simple as get some rest. Like, ‘Nick, stay in the house’. That’s not always been the easiest thing for me over my career.”

It’s a change in outlook that has taken the Australian to a first Grand Slam final at Wimbledon, Kyrgios achieving the milestone when Rafael Nadal withdrew from their highly anticipated semifinal with an abdominal tear.

Nick Kyrgios has advanced to the #Wimbledon gentlemen's singles final, with Rafael Nadal unable to compete in their semifinal due to injury https://t.co/YdZgHfq8LD

If it seemed an anticlimactic progression, it was perhaps countered by the efforts Kyrgios had required to reach that point. Two of his five victories were five-set battles, with his third-round match with No.4 seed Stefanos Tsitsipas extending to four tense sets.

Occurring in Kyrgios’ 30th main draw campaign at a Grand Slam, a final breakthrough was in many ways an unlikely feat. At age 27 and ranked world No.40, the unseeded Kyrgios’ previous-best result at Wimbledon was a 2014 quarterfinal. He’s progressed beyond the third round only twice since.

“I never thought that I would be here. The ship, I thought, was gone,” Kyrgios admitted after his quarterfinal win. “To be a semifinalist at Wimbledon, it’s a special accomplishment for everyone, but I think especially for me.”

With many questioning his fitness, mental capacity and discipline, the Australian worked hard to eliminate self-doubt. “I almost started doubting myself with all that traffic coming in and out of my mind,” he said.

As he rewrites that narrative, Kyrgios is drawing on successful experiences from his past. Junior success at Wimbledon, including the boys’ doubles titles he claimed with Andrew Harris in 2012 and Thanasi Kokkinakis in 2013, helped ignite the Grand Slam dream.

“I can’t give enough credit to juniors, what it did for my confidence. Being around the Grand Slams at that young age, being around some of the top players, the facility, I don’t think I would have had the breakthrough in the men’s so quickly,” he commented.

More recently, Kyrgios had a more complete Grand Slam experience when he combined with his good friend Kokkinakis to claim the Australian Open 2022 men’s doubles crown.

“I think the doubles in Australia has really helped me at a Grand Slam level,” Kyrgios said. “I felt like just the kind of mundane, you win a match, you have a day off, you practise, you go again over a two-week period. I realised in Melbourne it’s a long time.

“You can’t explore, you can’t really go to the city here. You can’t enjoy your time as much as you would like to. You kind of have to stay in your house, be reserved, take your mind off things. I think in Melbourne I really realised that.”

While bitterly disappointed that his semifinal with Nadal didn’t eventuate, Kyrgios noted he was also “going to take every positive.” And it was particularly helpful after the adrenaline created by his progress to the final meant he only managed “about an hour” of sleep that night.

“I get to rest my body a little bit. It’s not bad going in there feeling fresh,” he said.

He’ll need all his energy when he faces Novak Djokovic in the six-time champion’s eighth Wimbledon singles final.

Kyrgios boasts a winning record against the No.1 seed, having won both of their previous matches in straight sets. “A Kyrgios-Djokovic final would be mouth-watering,” he said.

It was once a tense battle between two of the game’s most enigmatic players, but Kyrgios laughed: “We definitely have a bit of a bromance now, which is weird.”

Delivered with a cheeky smile, it was still the same old Kyrgios – but with a whole new outlook and a new Grand Slam milestone in his sights.