Australian Nick Kyrgios has powered into the singles semifinals at Wimbledon 2022. 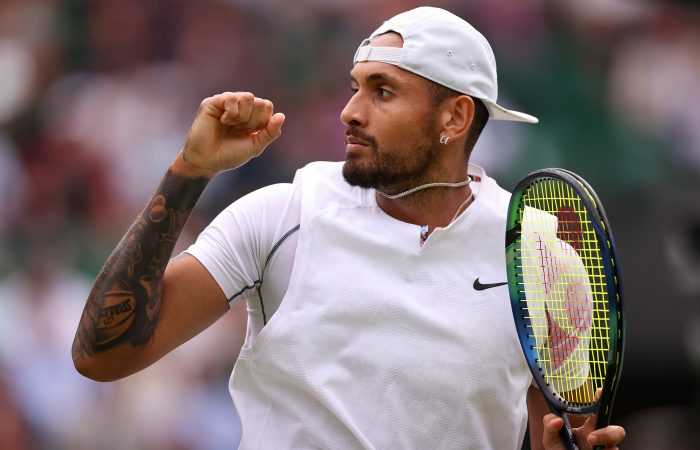 Nick Kyrgios has become the first Australian to advance to a Wimbledon gentlemen’s singles semifinal in 17 years.

The world No.40 powered past Chile’s Cristian Garin in the quarterfinals today, scoring a 6-4 6-3 7-6(5) victory in their No.1 Court showdown.

An emotional Kyrgios revealed after the match he had doubts whether he would ever reach a Grand Slam singles semifinal, admitting he “thought my ship had sailed”.

“I’m feeling really, really proud of myself and the team, the level I’m playing,” he said.

“I obviously had thoughts the last year, year and a half, whether I wanted to play anymore. Lost the love, lost the fire, lost the spark. Then some things just changed in my life. I don’t know. I kind of just rediscovered that I’ve got a lot of people that want me to play, that I play for. I’ve got a lot left in the tank. I feel like I’m probably playing some of my best tennis, mentally feeling great.”

Yet there were some worrying early signs for Kyrgios, who was contesting his first Grand Slam quarterfinal in more than seven years.

The 27-year-old Australian was broken to love in the opening game and lost the first nine points of the match. However, he managed to quickly find his range and snare a 37-minute opening set.

With the momentum firmly in his favour, Kyrgios raced ahead 4-1 in the second set and soon built a two-sets-to-love lead.

World No.43 Garin heaped the pressure on Kyrgios in the third set, earning multiple break point opportunities on the Australian’s serve in the sixth game. However, the 26-year-old Chilean was unable to take his chances.

When he was tested, Kyrgios simply had too many answers. He demonstrated that again in a third-set tiebreak, clawing back from a 3-5 deficit to win four consecutive points and close out victory after two hours and 11 minutes on court.

Kyrgios, who finished the match with 17 aces and 35 winners in total, becomes the 13th Australian man to reach a Wimbledon singles semifinal in the Open era – and the first to do so since Lleyton Hewitt in 2005.

Kyrgios, the first unseeded male player to reach a Wimbledon semifinal in 14 years, now faces second-seed Spaniard Rafael Nadal for the place in the final.

Nadal owns a 6-3 win-loss record against the Australian and has won their three most recent encounters. They have played twice previously at Wimbledon, which includes Kyrgios’ famous fourth-round victory against the then-world No.1 in his breakout 2014 run.

“Obviously, we know, two completely different personalities. I feel like we respect the hell out of each other, though. I feel like that would be a mouth-watering kind of encounter for everyone around the world.”

There was better news for Australians in the doubles competitions, with Matthew Ebden and Sam Stosur earning their spot in the mixed doubles final.