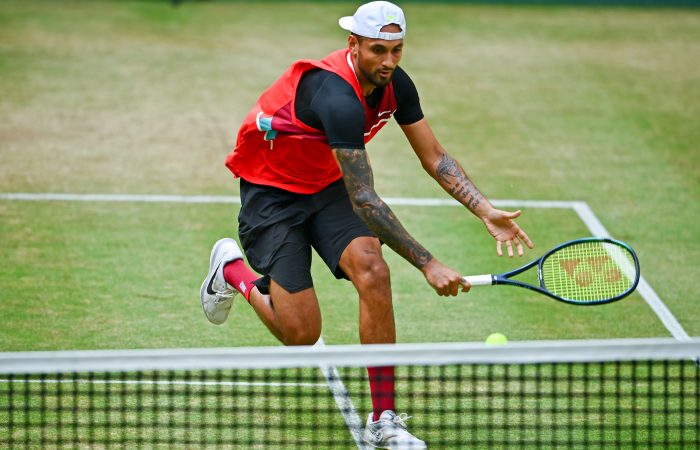 “I just know if I’m serving well and I’m playing well, I can beat anyone. I have pretty much beaten everyone in the draw before,” he declared.

The 27-year-old Australian has halved his ranking in the past month, returning to the world’s top 40 after winning seven of his nine matches on grass. This included back-to-back semifinal appearances at Halle and Stuttgart.

“I’ve played a lot of matches, had some great results,” said Kyrgios, who scored three top-30 wins during this period.

“(I’ve) beaten some really good players. I’m just happy where my level’s at. I think I’ve had probably some of the best preparation I’ve had for a while on the grass.”

Although Kyrgios withdrew from Mallorca last week with an abdominal injury, he revealed his body was feeling better after some rest.

Carefully managing his playing schedule is an increasingly important priority for Kyrgios, who opted to sit out the recent European clay-court swing to enjoy some time at home in Australia and prepare for the grass-court season.

“I know where my game’s at. I know if I’m feeling confident, I’m playing well, I’m able to just light it up kind of whenever I want,” he said.

“But I’ve just got to pick and choose. I don’t play that often. When I play now, I’ve got to make sure I’m having some good results, putting my best effort. If I’d figured that out earlier in my career, maybe the narrative may have been different. But I’m proud to be where I’m at at the moment.”

Kyrgios owns a 15-7 win-loss career record at Wimbledon, where his best result is a quarterfinal run in his 2014 debut.

“Obviously another Grand Slam. Never going to take it for granted. When I was young, never thought I’d play almost 30-plus Grand Slams. Super proud to be here again. It’s a special energy here.”

“I was once that kid that got a wildcard at the Australian Open. Felt really good just to be around, soak it all in, the media, the fans, everything, the hype. I know how he’s going to be feeling,” Kyrgios said.

“He’s going to go out there and he’s going to just play freely, nothing to lose. Being in that position, I loved it. I was an underdog every time I walked out there. I had no pressure. So I know it’s going to be a dangerous match. It’s not always easy to be the favourite, just sweep aside someone. Never. I’ve had matches like that and it hasn’t gone well.”

Kyrgios is hopeful he won’t be the only Australian enjoying a deep run in the gentlemen’s singles draw at the All England Club this fortnight and predicts many of his peers can progress far in the tournament too.

“I wouldn’t be surprised if any of them had a breakthrough week. They’ve just got to believe.”