In an electrifying run to the AO 2022 men's doubles final, long-time friends Thanasi Kokkinakis and Nick Kyrgios are bringing tennis to new fans. 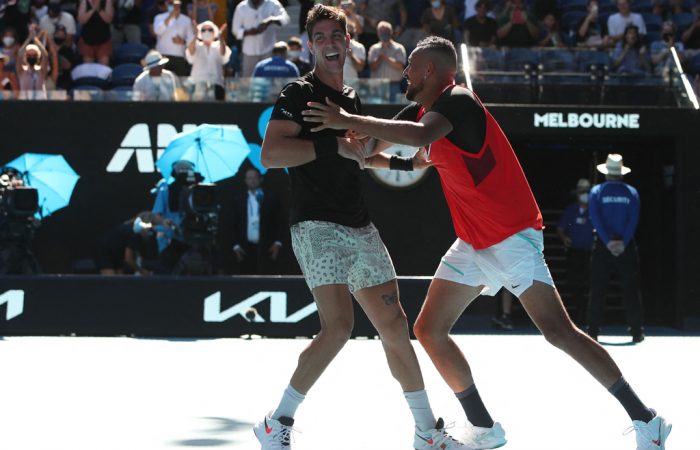 For all the famous individuality that’s made them two of the game’s most magnetic personalities, Thanasi Kokkinakis and Nick Kyrgios have long created something even more special as a package.

A fascinating friendship was first forged in their parallel path as developing juniors and in an exciting sign of the future, a 17-year-old Kyrgios defeated Kokkinakis to win the Australian Open 2003 boys’ singles title.

“We’re pretty good mates,” Kokkinakis, then 16, said at the time. “We push each other.  We travel a lot together. It always helps training with each other and playing. It’s a good feeling.”

A tight friendship soon produced rewards on the doubles court. In 2013, the exciting young Australians teamed to win the Wimbledon boys’ doubles title.

Soon afterwards, the “Special K” moniker was born as Kokkinakis and Kyrgios first combined as a duo at a senior level.

They’ve since contested four Australian Open doubles draws together – but never with the same breathtaking impact they’ve made in Melbourne this fortnight.

Winners over the first, 15th, sixth and third seeds in their showstopping progress to the championship match, Kokkinakis and Kyrgios are arguably the surprise package of the 2022 tournament.

And while much has been made of the robust crowd support that’s propelled the Special Ks through each electrifying victory, progress for the two extroverts is also helped by their long friendship.

“We complement each other really well. I love playing with him, it’s so much fun,” said Kokkinakis.

“We get along off the court well and I think the fans and everyone on TV can see that friendship. It’s authentic. We just have fun out there and the crowd gets behind it. It feels like a Davis Cup atmosphere out there.”

Few could deny that the festival atmosphere that’s created in the process also brings many positives. For Kyrgios, it’s all about taking tennis to a new audience.

“We are bringing the game to new levels – not just on the doubles court,” he insisted earlier in the week, before underlining his point after Thursday’s semifinal win over world No.7 Marcel Granollers and world No.6 Horacio Zeballos.

“My goal is to only bring new fans that may not be following tennis to watch tennis,” said Kyrgios.

“If they flick on a match and they have Thanasi and I playing in an entertaining doubles match, they know nothing about tennis, if they watch that match just then, they probably would tune in next time.

The Special Ks are doing so with a new appreciation – and focus – for doubles. Relating that they’ve “come of age” at this tournament, Kyrgios explained he’s never felt so focused in this medium.

“I feel like favourites out there,” he said, also crediting the stunning form that Kokkinakis has already achieved this season. “The way he’s playing, he’s obviously very confident over the last month that he’s had, which is amazing to see.

“We’re locked in. It’s probably the best doubles that we’ve played together.”

Given the success of their AO 2022 partnership, it’s obvious to wonder if the Australians might team more often.

“It’s up to Nick. He’s in high demand. I’m just trying to get him where I can,” said a smiling Kokkinakis. “Hopefully we can. I mean, we have a lot of fun.”

For Kyrgios, the focus is entirely on the present. “We haven’t drawn up any goals of what we want to achieve this year in doubles,” he said. “I just want to play and give the people of Australia and the Australian Open a show and genuinely try and grow the sport of tennis.”

The Special Ks have their next chance to do so in tonight’s Australian Open men’s doubles final against Matt Ebden and Max Purcell, which marks the first all-Australian decider since 1980.

Almost a decade since they achieved Grand Slam success as juniors, it’s a first opportunity for Kokkinakis and Kyrgios to emulate their feats at a senior level.

Fans can expect the same high-energy approach from tonight’s finalists.

As Kokkinakis surmised: “If we play how we’ve been playing, play with that energy, hopefully feed off the crowd again, play relaxed and free, we can do well. ”