World No.1 Ash Barty has become the first Australian to win an Australian Open women's singles title in 44 years. 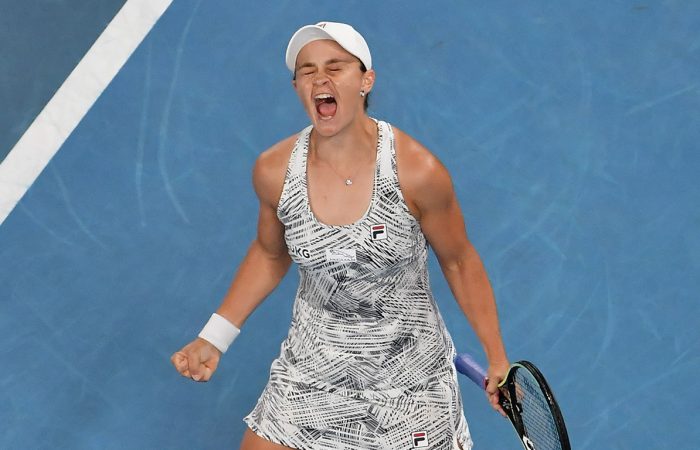 The world No.1 recorded a thrilling 6-3 7-6(2) victory against American Danielle Collins in tonight’s championship match at Rod Laver Arena.

“This is just a dream come true for me,” said an emotional Barty. “I’m so proud.”

Barty, the first local contender to reach this stage in an Australian Open women’s singles draw in 42 years, made a confident start and held in the opening game.

Collins, contesting her first Grand Slam final, was not overawed either. Games went on serve early, until Barty struck in the sixth game to take a 4-2 lead.

From there, the 25-year-old Australian closed out the opening set in 32 minutes.

Barty was dominating on serve, winning 94 per cent of first serve points and striking five aces. Collins was struggling to get a read too, making only 38 per cent of returns in play.

But the feisty American made her move early in the second set, breaking Barty’s serve in the second game and building a 2-0 advantage.

It was, incredibly, only the second time this tournament that Barty had lost a service game.

The top-seeded Barty had two break points in the next game, but was unable to convert.

Barty briefly stemmed the momentum, holding to love in a 62-second game, to get on the board in the second set.

But as Collins broke again and raced to a 5-1 lead, it appeared the match was heading to a deciding set.

Barty, though, had other plans.

“Once I was 1-5 down, I just wanted to try and shift and be a little more aggressive, adjust a couple of things tactically just to get momentum if we went to a third,” Barty said.

“Tennis is a funny game with the scoring system. Things can change so quickly it feels like at times.”

The Australian reeled off five of the next six games to force a tiebreak.

A calm Barty then sealed a sensational victory in 87 minutes, roaring as she struck a forehand winner to win the tiebreak and secure the title in front of a rapturous crowd.

“It was a little bit surreal,” Barty said of that moment. “I didn’t quite know what to do or what to feel.”

“As an Aussie, the most important part of this tournament has been able to share it with so many people,” Barty said.

“The crowd has been nothing shy of exceptional. This crowd is one of the most fun I’ve ever played in front of and you brought me so much joy out here today. You relaxed me and forced me to play my best tennis.”

This is Barty’s third Grand Slam singles title, following her victories at Roland Garros in 2019 and Wimbledon last year.

The world No.1 joins Serena Williams as the only active player to win major titles on three different surfaces.

“To have a Grand Slam title on each surface is pretty amazing,” Barty admitted. “I never probably thought it would ever happen to me. So very, very lucky and very humbled and privileged.”

A Grand Slam champion on three different surfaces, you are the complete player @AshBarty and I am so happy for you tonight. There’s nothing like winning at home, congratulations #AO2022 champion, it is wonderful to be here for this moment and to celebrate with Australia. 🚀

Barty also becomes the fifth Australian in the Open era to win the Australian Open women’s singles title and the first local contender to hold aloft the Daphne Akhurst Memorial Cup since Chris O’Neil in 1978.

O’Neil was at Rod Laver Arena this evening, proudly watching as Barty joined elite company in triumphing at her home Grand Slam.

“To get to experience to play at home is really special, and to be here as a champion of the tournament is really exciting.”

“To be a very small part of an amazing history in tennis as an Australian is really, really neat,” Barty said.

Barty’s also victory coincides with the tournament’s centenary of women celebrations, with this year marking 100 years since the women’s singles competition was introduced.

Barty is the 47th woman in total, and 17th Australian, to claim the title in this period.