A brilliant summer continues for Charlotte Kempenaers-Pocz, with the South Australian through to the semifinals of the AO 2022 girls' event. 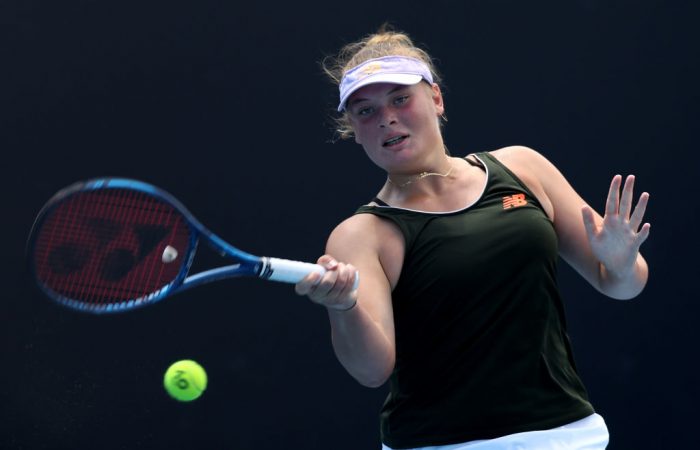 Teen sensation Charlotte Kempenaers-Pocz has become the first Australian to reach the semifinals of a home junior Grand Slam since 2016, powering through her quarterfinal this afternoon.

In her strongest performance of the tournament so far, Kempenaers-Pocz dominated her clash with Germany’s Carolina Kuhl, prevailing 6-1 6-2 in less than an hour.

It took the 17-year-old just 24 minutes to take the opening set 6-1, having peeled off the first five games and 21 of the opening 26 points of the match.

She made only five errors in the first set, winning 92 per cent of points on her first serve.

The second set saw Kempenaers-Pocz send down seven aces and drop only three points on serve as she rounded out arguably the best performance of her already impressive young career.

Having spent nearly two and a half hours on court in her third-round match, the South Australian was in a hurry. She played with aggression and positivity from the very first point, giving the German no time to settle into the contest.

She will now take on the eighth seed Sofia Costoulas of Belgium in the semifinals, as she looks to become the first Australian to win a Grand Slam girls’ singles title since Ash Barty lifted the Wimbledon trophy back in 2011.

“I don’t want to think about it too much,” said Kempenaers-Pocz of her semifinal. “I’ll have a shower and an ice bath tonight and start to plan for that one a bit later on.”

The last local to win the Australian Open girls’ singles title was Siobhan Drake-Brockman in 1995.

Kempenaers-Pocz also competed in a doubles’ semifinal alongside Taylah Preston, the Australian duo taking on No.1 seeds Clervie Ngounoue of the USA and Diana Shnaider of Russia.

Kempenaers-Pocz and Preston were up a break in the opening set and served for it at 5-4 but were broken back twice to lose the set 7-5.

In the second set they again went up a break at 3-2, only to drop serve in the very next game.

That second set progressed to a tiebreak where Ngounoue and Shnaider recovered from 2-4 down to take the breaker and with it, the match.

“It was our first time playing together so I’m happy with what Taylah and I have been able to do,” the South Australian said.

Kempanears-Pocz and Preston were looking to become the first Australians to win the Australian Open girls’ doubles title since Casey Dellacqua and Adriana Szili in 2003.