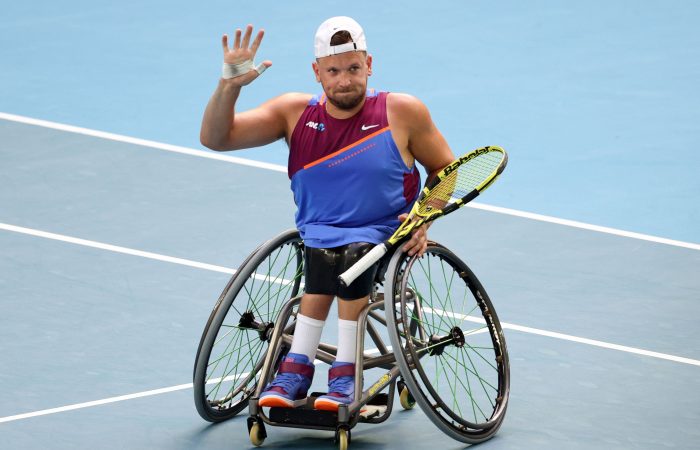 Dylan Alcott dreamed of making a difference – and there’s no doubt he did.

The world No.1 inspired many during his incredible professional tennis career. This included Sam Schroder, a 22-year-old from the Netherlands, who spoiled Alcott’s farewell by posting a 7-5 6-0 victory in today’s Australian Open 2022 quad wheelchair singles final.

“You’ve done a great job inspiring the world,” Schroder said to Alcott during the trophy presentation. “I hope to one day to be able to do just one small part of that as well. So thank you for all that you’ve done.”

Alcott had been attempting to win a record eighth consecutive Australian Open title, but today was Schroder’s time to shine.

After a tight opening set, world No.2 Schroder took control and raced to a 5-0 second-set lead.

A vocal Rod Laver Arena crowd was willing Alcott, who earlier this week was named the Australian of the Year, into the contest and the 31-year-old did his best to try and extend the match.

But in the end, Schroder proved too strong and claimed his second career Grand Slam singles title.

The retiring Alcott, whose 31 unforced errors proved costly, was gracious in defeat.

“Congratulations to Sam, mate you deserved to win today. You were definitely the better player,” he said.

An emotional Alcott also thanked the tournament, his team and his fans for their support throughout his career.

“I’m really the luckiest guy in the world and I didn’t need to win today to realise that,” Alcott said.

“It would have been nice to win, to be honest. But I’m still the luckiest person I’ve ever met. I’m the luckiest guy in this country, if not the world, to live the life that I live.”

Alcott retires as one of the sport’s all-time greats. His remarkable feats include becoming the first male tennis player in history to achieve a Golden Slam (winning all four major titles plus a Paralympic gold medal in a single season).

Thank you for everything 💙#AusOpen • #AO2022 pic.twitter.com/5KnxT2OaiO