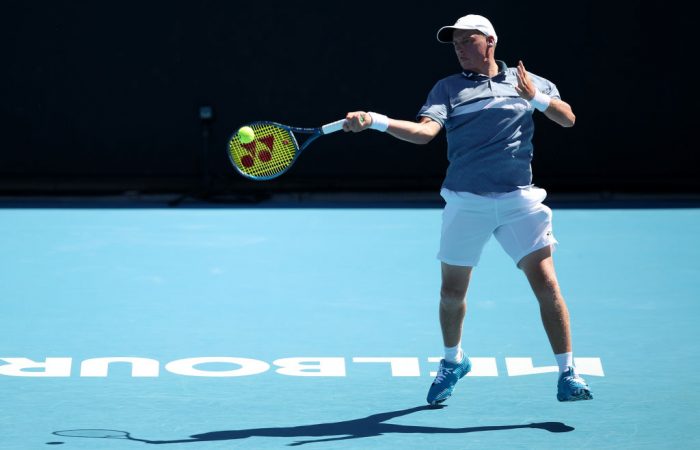 Taylah Preston lost a pulsating second-round clash with Russia’s Diana Shnaider in the junior girls’ singles tournament, fighting back twice to push the No.2 seed all the way.

Preston dug deep after a slow start, recovering from 1-5 to take the opening set to a tiebreak as she began to attack Shnaider’s second serve.

Having lost 24 of the first 31 points in the match, the Australian rattled off 25 of the next 33 in an inspired display.

Schnaider lifted in the tiebreak, taking it 7-2 as she swung the momentum back her away.

She maintained it in the second set, with an early break of serve putting pressure on the West Australian once more.  However just as she did in the first, Preston rallied, coming from 1-4 down to level things up.

Preston created seven break point chances to four, with both players converting three times each. She struck 20 winners to 19 and made 38 unforced errors to 39, underlining just how close the match was.

It was a positive fortnight for the 16-year-old, who won a match in main draw qualifying last week before backing that up with a win in the first round of juniors.

Earlier this week, she reflected on what she’d gained from that experience.

“Playing against some older and better players I think helped me a lot in preparing for the Traralgon tournament and this one as well,” Preston said.

“I plan to get my ranking up so I can play all of the junior Slams.”

Another Australian, Zara Larke, staged a brave fight before Kenya’s Angella Okutoyi claimed a 7-6(0) 5-7 6-1 victory in the girls’ event.

In a rollercoaster first set, Larke claimed a break to lead 3-0, before falling behind a break at 4-5. The set was eventually decided in a tiebreak, which Okutoyi won 7-0.

Competing with aggression, the Kenyan produced nine winners and 25 unforced errors in that opening set, with Larke struggling to establish regular rhythm against that power.

The Australian turned the tables in the second set, peeling off the first four games inside 15 minutes, and in the process taking eight of the first nine points off her opponent’s serve.

Okutoyi fired back, dragging it to 5-5 before Larke found another break of serve and closed it out 7-5.

This time Larke had out hit her opponent with six winners to three, and only 14 errors compared to 20.

In the third set Okutoyi took control and powered away in the afternoon heat, taking the decider 6-1 to progress to the third round.

Also in action today was Edward Winter, who battled hard against No.1 seed Bruno Kuzuhara in the boys’ singles tournament.

The American claimed a 7-5 6-1 win over Winter – who also won a match in main draw qualifying and backed up with a first-round win in juniors – in an hour and 19 minutes.

Kuzuhara’s ball striking was phenomenal, with the No.2 seed peeling off 23 winners, including 14 off the forehand wing.

Having turned 17 last September of last year, Winter established a strong platform to build on this year.

“It’s been an incredible experience, playing in front of my home crowd. Every time I step out on court is just a dream really,” said Winter, who was a winner over former world No.6 Giles Simon in qualifying.

“I’ve been coming here every year since I was born with my family, so to be here playing is incredible.

“Playing (Giles) Simon and a couple of those matches early allowed me to get a lot of confidence and find some areas of improvement.”