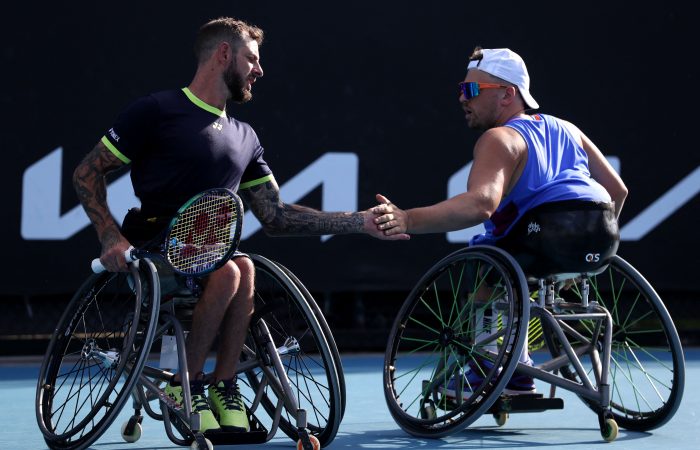 Schroder and Vink took control early and never relented as they powered to a 6-1 7-6 (3) victory in their semifinal clash at Melbourne Park this evening.

The pair won the US Open together last year, defeating Alcott and Davidson in the final on that occasion.

Schroder and Vink broke serve four times to one in the opening set, winning 26 total points to 13.

The Aussie pair would win only six points on serve during that first set, compared to 11 from their opponents, who also hit three winners to one.

The second set was far more competitive, with the Australian pair breaking in the seventh and ninth games to put their noses in front at 5-4.

Vink and Schroder defended solidly though to take the second to a tiebreak, jumping to a 5-1 lead in the blink of an eye.

Alcott fired in two brilliant cross-court winners to keep the Australians in the contest, before Schroder delivered the final blow in perhaps an unofficial changing of the guard.

Vink and Schroeder won 67 points to 50 and struck nine winners to six in the 63-minute tussle.

The defeat means Alcott will end his career with nine Grand Slam quad wheelchair doubles titles, with four of them coming in Melbourne.

Both Alcott and Davidson have booked spots in the quad wheelchair singles semifinals to be played tomorrow.

Alcott will face Britain’s Andy Lapthorne and Davidson will take on Schroder, with the chance of an all-Australian final still very much alive.