Fan favourites Nick Kyrgios and Thanasi Kokkinakis are through to the men's doubles quarterfinals at Australian Open 2022. 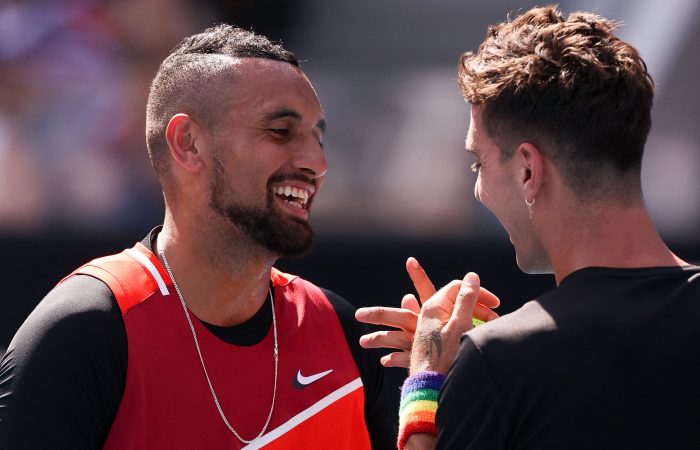 Nick Kyrgios and Thanasi Kokkinakis have continued their thrilling run at Australian Open 2022, advancing to the men’s doubles quarterfinals.

The Australian wildcards eliminated No.15 seeds Ariel Behar of Uruguay and Gonzalo Escobar of Ecuador in third-round action at Melbourne Park today.

Kyrgios and Kokkinakis started strongly, hitting 16 winners to nine in the opening set and losing only five points on their service games.

World No.47 Behar and world No.39 Escobar showed their doubles nous to claim the second set, briefly subduing the momentum of the Aussie pair.

But with an excited crowd spurring them on, Kyrgios and Kokkinakis regained control and secured victory after one hour and 55 minutes on court.

The Aussie pair fired 23 aces and 38 winners in total in the hard-fought encounter.

“These guys were tough. They served well, it was incredibly tough to get any rhythm on return,” Kyrgios said.

Well, that was fun 👀

Let's do it again in the quarterfinals! #GoAussies • #AO2022 • #AusOpen pic.twitter.com/nnlYO9ZQaD

This marks the first time that 26-year-old Kyrgios and 25-year-old Kokkinakis, who have now knocked out two seeded teams, have reached a Grand Slam doubles quarterfinal.

“We’ve been through a lot together. We play for fun, but coming out here we want to impress you guys,” Kokkinakis said. “Having this support and the atmosphere is unbelievable.”

Kokkinakis and Kyrgios will face world No.18 Tim Puetz of Germany and world No.15 Michael Venus of New Zealand in the quarterfinals. The sixth-seeded duo advanced via a walkover today from Aussie wildcards Chris O’Connell and Jason Kubler.

The Aussie boys are daring to dream, with Kyrgios declaring they are title contenders.

“I definitely think we’ve got a good shot at winning this,” Kyrgios said.