With a straight-sets win over Amanda Anisimova, world No.1 Ash Barty moves into the Australian Open quarterfinals for a fourth straight year. 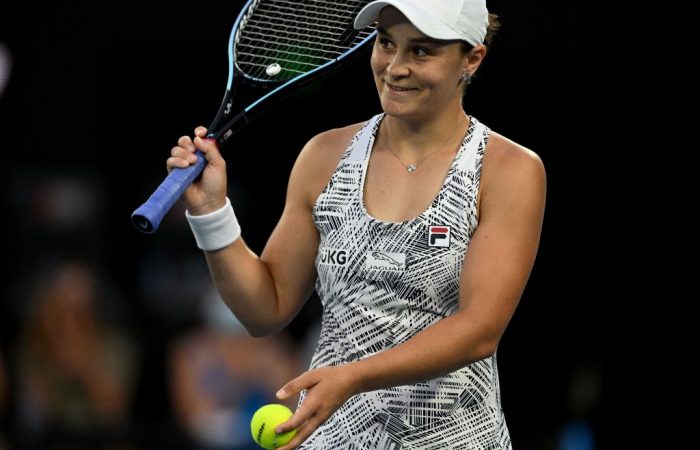 An Australian Open trophy to match her silverware from Roland Garros and Wimbledon edges ever closer for world No.1 Ash Barty.

With a 6-4 6-3 win over Amanda Anisimova tonight at Rod Laver Arena, Barty moved into an Australian Open quarterfinal for a fourth straight year.

Barty required one hour and 14 minutes to overcome the American, who had saved two match points to upset defending champion Naomi Osaka in the previous round.

The 20-year-old Anisimova took an eight-match winning streak into her second career meeting with Barty, after defeating Aliaksandra Sasnovic in the final of the Melbourne Summer Set at the start of the year.

But the accomplished Barty had also started her season by lifting a trophy, with a second Adelaide International victory marking the 14th singles title of her career.

And while one streak ended for Barty – Anisimova halting her remarkable run of consecutive service holds at 63 – another continued as she recorded her seventh straight match win in straight sets.

There are in fact 16 consecutive set wins on Barty’s 2022 record, with the lone blip of a service game dropped against Anisimova early in the second set easily managed by the world No.1.

“Honestly, I’m not counting how many games I hold in a row or not,” she said.

“The fact I was able to reset, break straight back, was really important, just to be able to reset myself, go again and continue to do the right things.”

More telling for Barty was as her calm under pressure, with four break points saved against the sharp-hitting 20-year-old.

Barty, by contrast, converted four of the 11 break point opportunities she earned of her own.

There were also 23 winners compared to 20 from Anisimova and her 17 errors were exactly half of Anisimova’s.

“I enjoy sharing the court with her, I enjoy testing myself against her. She’s got an exceptional game that puts you under the pump right from the get go,” Barty said.

“So it was nice to be able to hold firm tonight and bring the points back into my patterns more regularly and the big ones that matter most.”

A seventh straight match win sets a quarterfinal with another American, Jessica Pegula, whom Barty defeated in their only match at Roland Garros in 2019.

“She’s a great competitor,” said the Queenslander, noting Pegula’s ability to control from the baseline as particularly challenging

“The last couple years her progression and her confidence with the way that she plays has gone and absolutely skyrocketed.

“Again, one of her best attributes is the fact that she can compete point in, point out, and irrelevant of the score she’s able to turn up time and time again. We just have to compete, go out there and have fun and see how we go.”