Inglis bows out in Australian Open third round

Maddison Inglis' AO 2022 campaign ends with a loss to Kaia Kanepi, but the Australian will take many positives from her momentous week. 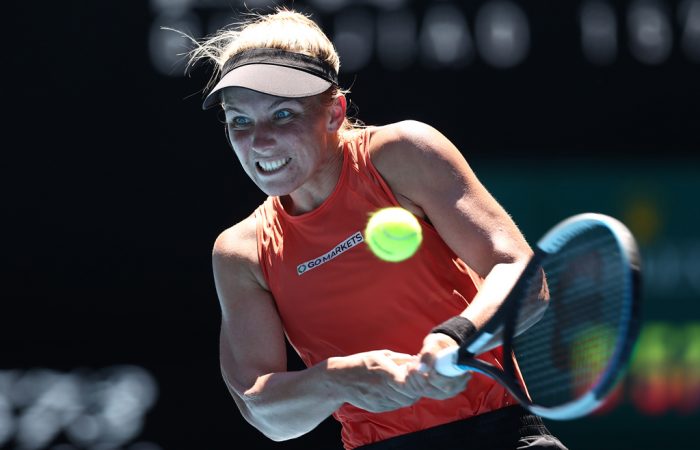 A final 16 appearance at Australian Open 2022 wasn’t to be for Maddison Inglis, but the West Australian can leave her home Grand Slam with her head held high.

Competing in the third round of a major for the first time in her career, Inglis challenged the experienced Kaia Kanepi before the Estonian claimed a 2-6 6-2 6-0 win.

“Today was a pretty special opportunity I think and experience. I thought I played really well in the first set,” Inglis said.

“It got away from me a bit there (but) I’m really grateful for the experiences that I’ve had this week and I’m looking forward to taking it into this year.”

There's lots to be proud about for wildcard Maddison Inglis. #GoAussies • #AO2022 • #AusOpen

Prior to this week the 24-year-old Inglis was yet to win back-to-back matches on the WTA Tour and hadn’t claimed any Grand Slam wins at all.

But after an upset of 2021 US Open finalist Leylah Fernandez to open her third main draw campaign in Melbourne, Inglis claimed a come-from-behind win over hard-hitting American Hailey Baptiste in the second round.

And for a time at Rod Laver Arena, it appeared the accomplished Kanepi would be the next victim in Inglis’ momentous week.

Competing with laser-shape focus and remarkable composure, Inglis dominated in the early stages, claiming a double break of serve to race to a 4-0 lead.

While Kanepi appeared to struggle with some searing Melbourne conditions, Inglis was high on energy as she claimed the first set in 31 minutes.

At age 36 and with six Grand Slam quarterfinals on her long tennis record, Kanepi’s vast experience inevitably came into play.

An early break of served helped her settle in the second set and the Estonian went on to secure the match.

She finished with 24 winners compared to 14 from Inglis and recorded four less unforced errors as she completed her 91-minute win.

For Inglis, there were many positives to take from a breakthrough week.

“(I) just feel like I’ve taken a bit of belief out of it that I can play at this level and I belong here,” said the Australian, acknowledging that sustaining a higher level for longer periods is a logical next step in her career.

“But, yeah, I’m going to take a lot of confidence into this year which is exciting.”

Inglis next hopes to compete in WTA tournaments in Doha and Dubai , with Indian Wells and Miami also pencilled into her plans.

And while she notes there’s still significant work required to make her top-100 breakthrough, Inglis sees exciting possibilities ahead.

“Belief does a lot for, like, your game, how you play,” she said. “I’m just hoping to channel that and take it into the next tournament.”