Dropping just three games in her opening two matches, world No.1 Ash Barty has powered into the third round of Australian Open 2022. 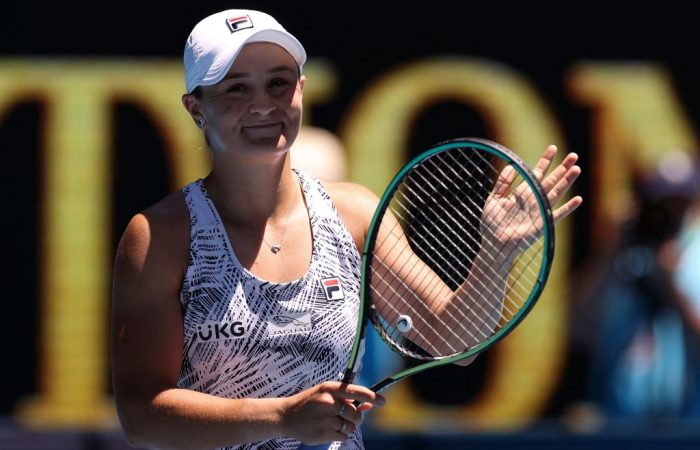 For a player who loves to compete at Rod Laver Arena, Ash Barty certainly doesn’t linger.

After launching her AO 2022 campaign with 54-minute win over Lesia Tsurenko on the famed blue court two days ago, the world No.1 took less than an hour today to overwhelm second-round opponent Lucia Bronzetti.

“I felt like I wanted to try to use my experience a little bit today, get off to a quick start. I felt like I was able to do that,” said Barty of her 6-1 6-1 victory over the Italian qualifier.

“I served well. I was able to find plenty of forehands and control the match quite well.”

Barty set a third-round meeting with No.30 seed Camila Giorgi, who could be excused for some nerves given Barty’s form so far this season.

After lifting a 14th singles trophy in Adelaide two weeks ago, Barty has amassed a six-match winning streak to start her year.

52 minutes is all @ashbarty needs to move into the third round, notching a 6-1 6-1 victory over Lucia Bronzetti.

Within that notable statistic is an even more impressive number – Barty has amassed 48 consecutive service holds since recovering from a first-set deficit in her first match in Adelaide.

The serve was a factor again as Barty fired eight aces over the No.142nd-ranked Bronzetti and didn’t face a single break point.

Building her serve as a weapon, said the world No.1, is a result of gradual improvements with her coach Craig Tyzzer.

“I’m not the biggest girl out there, but I know I’ve got a sound technique and I know if I can get my rhythm right and use it effectively, it can be a weapon,” Barty explained.

“Tyz and I put a lot of emphasis on my serve, I always have as a kid. I was always serving baskets and  baskets of serves to try to create that weapon, try to create a really sound shot.

“I think I’ve just been able to find some good rhythm and a big part of that is protecting my second serve when I need to do as well. I thought I’ve done a pretty good job of that over the last half dozen matches or so.”

The three games the Queenslander has conceded to reach the third round are the lowest number dropped by a No.1 seed at the tournament since Steffi Graf in 1989 and Martina Hingis in 2001.

She recognises the challenge in maintaining such authority against Giorgi.

While Barty holds a 3-0 match-winning record against the 30-year-old Italian, she was pushed to three sets by Giorgi in their most recent match in the second round of Australian Open 2018.

“It’s going to be a match where I’m going to have to serve well, bring in variety, make sure I can cover the court, neutralise the best that I can. She has the ability to hit you off the court without realising it’s happening,” Barty said of Friday’s match.

“It’s going to be another match with some fresh challenges. But having played her before, she kind of knows my game, I kind of know hers. It’s about going out there and trying to do it as good as I can.”