Aleksandar Vukic, Ash Barty and John Millman are among 29 Australian players in action on day three at Melbourne Park. 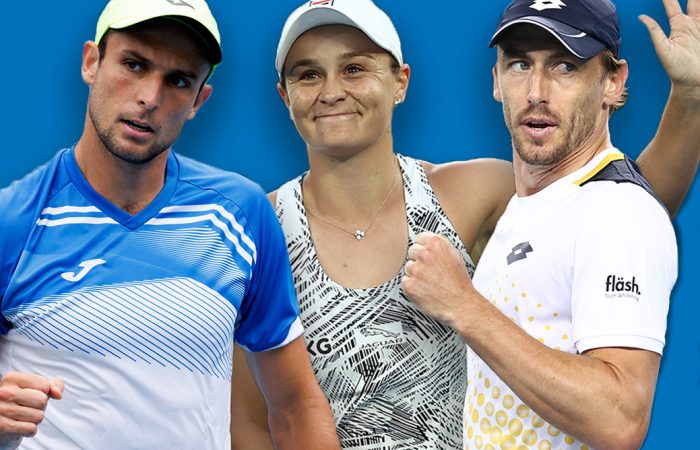 Australian wildcard Aleksandar Vukic is living “a dream” after progressing to the second round at Australian Open 2022.

The 25-year-old from Sydney, who is making his second AO main draw appearance, described his first Grand Slam win against No.30 seed Lloyd Harris as unbelievable.

“I came here as a kid and I was watching the Aussies play here,” Vukic said. “To play here myself, and to get the win … I can’t put it into words.”

The world No.144 is one of three Australian players, along with Ash Barty and John Millman, scheduled to compete in second-round singles matches on day three at Melbourne Park.

A total of 29 Aussie players are in action today, with first-round men’s and women’s doubles matches also on a jam-packed order of play.

[1] Ash Barty (AUS) v [Q] Lucia Bronzetti (ITA)
Women’s singles, second round, Rod Laver Arena, day session, second match
Barty is on a five-match winning streak and has not lost serve in her past four matches. The world No.1, however, is not necessarily worrying about building on such impressive numbers. “I’m not one for stats at the best of times,” admitted the top-seeded Australian. “You have to just try and do the best you can … that’s worked pretty well so far this year.” The 25-year-old from Queensland meets world No.145 Bronzetti in the second round. The 23-year-old Italian qualifier is contesting her first Grand Slam main draw and seeking a career-first top-50 win.
Head-to-head record: First meeting

[WC] Aleksandar Vukic (AUS) v [Q] Radu Albot (MDA)
Men’s singles, second round, Court 3, fourth match
Aussie wildcard Vukic was “over the moon” after scoring his first Grand Slam main draw win on Monday and credited fervent Court 3 crowd support for inspiring him during an impressive upset of No.30 seed Lloyd Harris. “It was one of the loudest atmospheres I’ve ever experienced,” Vukic said. The 25-year-old, currently ranked at a career-high world No.144, is back on that court today playing qualifier Albot. Vukic is wary of the 32-year-old Moldavian, who has been ranked as high as No.39. “I’m not taking him lightly at all,” Vukic said of the world No.124, who reached the AO 2021 third round.
Head-to-head record: First meeting

John Millman (AUS) v [3] Alexander Zverev (GER)
Men’s singles, second round, Rod Laver Arena, night session, second match
Millman has advanced to the second round at the Australian Open for the fifth time in his career. The 32-year-old from Brisbane now meets reigning Olympic champion and world No.3 Alexander Zverev. “You have to be playing amazing tennis to match it against the top players,” said the world No.89 of the challenge. Millman did push the 24-year-old German to five sets at Roland Garros in 2019 and is hoping a hometown advantage proves a factor. “Hopefully I can get a bit of a rowdy crowd and a crowd that gets behind me,” Millman said. “I’ll give it my all.”
Head-to-head record: Zverev leads 2-0
Last meeting: Zverev won 6-0 3-6 6-3 (Cologne, 2020)

James Duckworth (AUS)/Marc Polmans (AUS) v [8] Jamie Murray (GBR)/Bruno Soares (BRA)
Men’s doubles, first round, Court 13, first match (from 11am AEDT)
Duckworth and Polmans own an impressive 5-2 win-loss record in AO doubles as a team, advancing to the quarterfinals together in 2020 and the third round last year. The Aussie pair, who are ranked No.222 and No.107 respectively, have a tough first-round assignment against the No.8 seeds. World No.19 Murray and world No.16 Soares won the AO 2016 men’s doubles title together and were US Open 2021 finalists.

[4] Sam Stosur (AUS)/Zhang Shuai (CHN) v Miyu Kato (JPN)/Sabrina Santamaria (USA)
Women’s doubles, first round, Court 14, second match
World No.15 Stosur is competing in her 17th AO doubles draw, teaming up with close friend and world No.8 Zhang. The fourth-seeded duo, who won the AO 2019 title together, are familiar with their first-round opponents. They beat world No.86 Kato and world No.55 Santamaria in straight sets during their thrilling title-winning run at last year’s US Open.

[WC] Lizette Cabrera (AUS)/Priscilla Hon (AUS) v Leylah Fernandez (CAN)/Erin Routliffe (NZL)
Women’s doubles, first round, Court 16, second match
Hon played her first professional doubles tournament alongside Cabrera in 2012. Ten years later, the close friends are teaming up for the first time at Grand Slam level. A tough first-round assignment awaits for 23-year-old Hon and 24-year-old Cabrera, who train together in Queensland. Fernandez, a 19-year-old Canadian ranked No.75, and Routliffe, a 26-year-old from New Zealand ranked No.52, made the US Open third round last year.

[WC] Alex Bolt (AUS)/James McCabe (AUS) v [WC] Thanasi Kokkinakis (AUS)/Nick Kyrgios (AUS)
Men’s doubles, first round, Court 3, third match (not before 3.30pm AEDT)
Kokkinakis and Kyrgios are teaming up at the Australian Open for the second consecutive year. “Playing with him is always an experience,” 25-year-old Kokkinakis said of 26-year-old Kyrgios. “I don’t think we’re the most sort of traditional doubles pairing you’ll see. We have fun out there. We like to get the crowd going.” The wildcard pairing face another all-Aussie duo. The 29-year-old Bolt is a two-time AO doubles quarterfinalist and partnering 18-year-old McCabe, who is making his AO debut.

[9] Storm Sanders (AUS)/Caroline Dolehide (USA) v Astra Sharma (AUS)/Ajla Tomljanovic (AUS)
Women’s doubles, first round, Court 7, fourth match
Sanders is making her 10th AO doubles appearance at a career-high ranking of world No.27. The left-handed Sanders, who lives in Melbourne, enjoyed a rapid rise in 2021. The 27-year-old’s season highlights included advancing to the Wimbledon semifinals and US Open quarterfinals alongside 23-year-old Dolehide. The ninth seeds face an all-Aussie duo, 26-year-old Sharma and 28-year-old Tomljanovic, in the first round.

[WC] Alexandra Bozovic (AUS)/Olivia Tjandramulia (AUS) v Jasmine Paolini (ITA)/Heather Watson (GBR)
Women’s doubles, first round, Court 12, fourth match
Tjandramulia enjoyed a career-best doubles season in 2021, rising to a career-high No.152. The 24-year-old from Queensland is making her third AO doubles appearance and first since 2017. Her partner is 22-year-old Bozovic, who she has teamed up with several times at ITF level. They face world No.125 Paolini, a 26-year-old Italian, and world No.100 Watson, a 29-year-old Brit, in the opening round.