Australian wildcard Chris O'Connell has made a winning start to his Australian Open 2022 campaign, beating France's Hugo Gaston in the opening round. 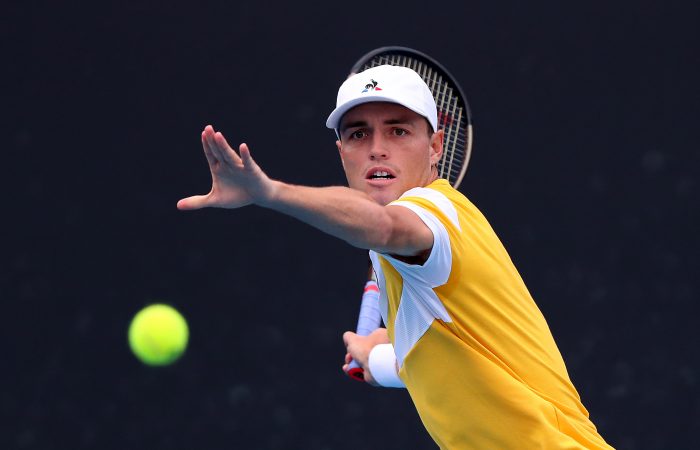 Chris O’Connell has matched his career-best result at the Australian Open, advancing to the second round for the second year in a row.

The 27-year-old Australian wildcard recorded a steely 7-6(4) 6-0 4-6 6-1 victory against world No.67 Hugo Gaston in first-round action at Melbourne Park today.

It is O’Connell’s third career win against a top 70-ranked opponent, all of which have been recorded in the past 12 months.

“(I’m) super happy,” O’Connell said. “I trained hard over December and it feels good that it’s paid off.”

A hard-fought opening set, which O’Connell clinched in a tiebreak, saw both players each strike 15 winners and win more than 80 per cent of first serve points.

The second set, however, proved different story. World No.175 O’Connell need only 33 minutes to take a two-sets-to-love lead, not conceding a game.

A spirited Gaston fought back in the third set, finally breaking O’Connell’s serve and briefly wresting back some momentum.

Yet O’Connell refused to be rattled and eventually closed out the four-set victory after two hours and 35 minutes on court.

“I just knew I had to regroup,” O’Connell said. “If I regrouped then I could take the momentum. That’s what happened.”

O’Connell, who finished the match with 43 winners, now faces Argentina’s Diego Schwartzman, the No.13 seed, in the second round.

“Obviously he’s an amazing player, makes a million balls,” O’Connell said of the world No.13.

“I’m going to have to play my best tennis. (But) I’m confident and really looking forward to it.”

Australian No.1 Alex de Minaur survived a four-set test against Italian teen Lorenzo Musetti, while Nick Kyrgios put on a show to begin his AO 2022 campaign in style.