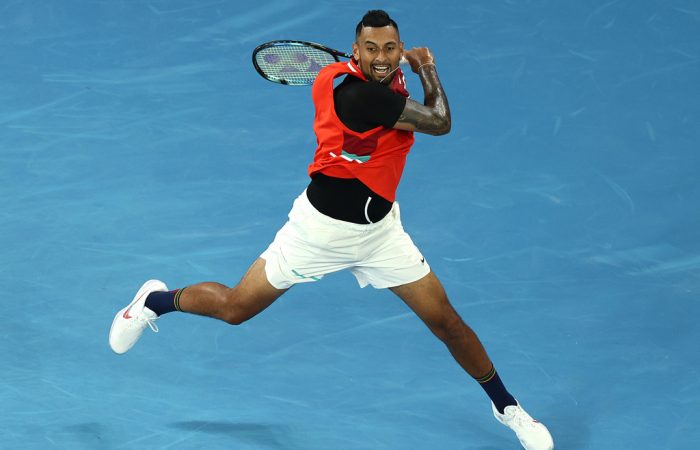 Some four months since the last on-court appearance, the Nick Kyrgios show resumed at the Australian Open this evening.

And as he delivered a typically crowd-pleasing performance – featuring everything from his deadly serve to exciting trick shots and spirited antics – Kyrgios also claimed a 6-4 6-4 6-3 win over qualifier Liam Broady.

With that, there was also a blazing reminder of the 26-year-old’s ability to challenge at the highest level.

Kyrgios hadn’t contested a professional match since a straight-sets loss to Stefanos Tsitsipas at the Laver Cup last September.

The Australian had in fact played only six tournaments since AO 2021, his start to the 2022 season delayed by a recent COVID-19 diagnosis.

But neither his absence nor his recent illness appeared to factor as Kyrgios dismissed Broady in one hour and 54 minutes at John Cain Arena.

Now sitting outside the world’s top 100 – thanks in part to an abbreviated schedule of just eight tournaments last season – Kyrgios easily took control against Broady, a world No.128 qualifier at this Australian Open.

With a break of serve in the opening game of the first game in both the first and second sets, Kyrgios earned a two-sets lead in just over 80 minutes.

Impressive serve stats provided a level of comfort for Kyrgios, who won 90 per cent of his first-serve points in the first set and 83 per cent in the second.

Even a smiling Broady appeared entertained at times as Kyrgios drew on the home crowd’s energy to build on those numbers.

Facing only a single break point on his own serve, the Australian claimed further breaks in the third and final game in the third – winning four of eight in total – to complete his dominant victory.

There were also 21 aces, just one double fault and a total 41 winners that easily outnumbered Kyrgios’ 26 unforced errors.

The performance was particularly pleasing given the 26-year-old only emerged from his COVID-imposed isolation only days earlier.

“Obviously hearing the news I was positive, I knew what that was going to lead to, the week of quarantine, and not having the ideal preparation, not getting the physio, not getting the treatment,” said Kyrgios.

“I’m pretty pleased with the way I responded. It was a pretty flawless, everything I could control, serving, attitude, all the non-negotiables, I did great.”

Kyrgios was equally pleased to reignite the passion to compete before a home crowd.

“I think from the get-go, I know I’ve got the crowd in the palm of my hand, and any time I can use that to, you know, spark a moment or spark some energy,” he admitted.

Never a dull moment when @NickKyrgios is on JCA!! 🍿

He defeats Liam Broady in three-sets to set up a second round clash with world No.2 Daniil Medvedev. #GoAussies • #AO2022 • #AusOpen pic.twitter.com/ic01Ur1Vj5

He’ll need all of that energy in his second-round encounter. With a 17th match win in his ninth Australian Open appearance, Kyrgios booked a meeting with No.2 seed Daniil Medvedev.

Kyrgios is a winner of two previous matches he’s played against the Russian, most recently in the 2019 Washington final.

“It’s going to be a hell of an experience for me. You know, he’s probably the best player in the world at the moment. So I’m pretty excited, I’m excited for that moment,” said Kyrgios of the recent US Open champion.

“That’s why I play the game. I feel like those matches still excite me, to go out there and play the best in the world.”