World No.1 Ash Barty has made an impressive start to her Australian Open 2022 campaign, beating Ukrainian qualifier Lesia Tsurenko in the opening round. 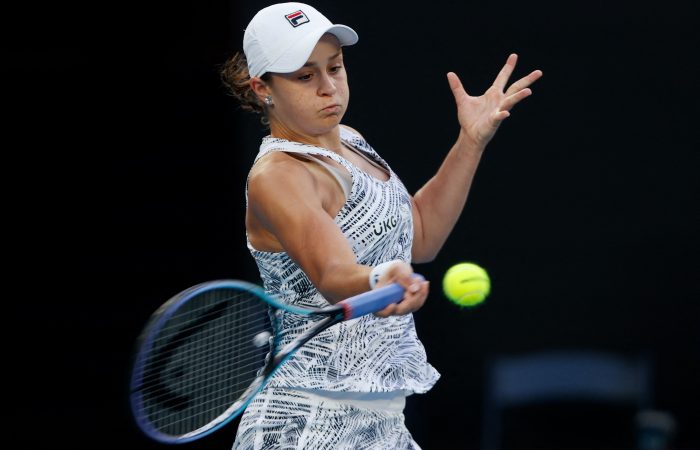 Ash Barty has made an efficient start to her Australian Open 2022 campaign.

The world No.1 powered to a 6-0 6-1 victory against Ukrainian qualifier Lesia Tsurenko in opening-round action at Rod Laver Arena this evening.

“It’s certainly nice to be back on home soil now and playing as well as I did tonight was a lot of fun,” Barty said after needing only 54 minutes to book her place in the second round.

“There’s always something special about playing on a Monday night in the Australian Open.”

🇦🇺 @ashbarty drops just one game on her way to a 6-0 6-1 victory against Lesia Tsurenko to reach the #AusOpen second round.

Tsurenko has been ranked as high as No.23 and was a US Open 2018 quarterfinalist. However, the world No.119 proved no match for Barty tonight.

The 25-year-old from Queensland produced a dominant display, firing five aces and winning 73 per cent of first serve points.

Barty tallied 14 winners in total, including six from her forehand side.

“I felt like it was nice and clean,” Barty assessed of her performance. “End to end, I did a good job in adjusting with the wind and I felt like I was able to control the points with my forehand.”

The top-seeded Australian now meets another qualifier, 23-year-old Italian Lucia Bronzetti, in the second round.

It will be Barty’s first meeting with the world No.142, who is making her Grand Slam main draw debut this week.