in a dream start to the 2022 season, Thanasi Kokkinakis claims his long-awaited first ATP title in his home city at the Adelaide International. 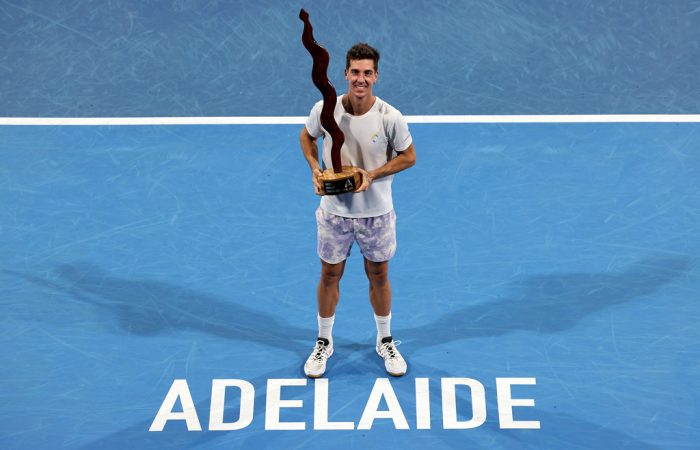 Perseverance, courage and heartbreak had for so long been the story of Thanasi Kokkinakis.

But finally, the Australian is rewriting the script, with triumph the newest headline.

Kokkinakis won his maiden ATP title in his home city of Adelaide tonight, after an extraordinary contest with Frenchman Arthur Rinderknech.

As the 25-year-old fell to the ground with tears in his eyes, many in the crowd would have shed some with him.

Kokkinakis’ journey to this title has been far harder than most, given his well-documented challenges with injury.

“You feel so many emotions and a huge amount of relief as well,” Kokkinakis reflected. “You spend all the hours rehabbing from injuries you think you may never get back from.

“To see the tears in my mum and dad’s eyes was really emotional for me.”

In a pulsating final, Kokkinakis outlasted his opponent, eventually prevailing 6-7(6) 7-6(5) 6-3 in his home city.

“I remember coming to this court after school every day. I love it so much,” he said. “I wouldn’t want to win my first title anywhere else.”

The first set was a serving masterclass from both men, with 47 out of 53 points won on first serve at 89 per cent from both players.

Remarkably, 28 of the last 30 points of the set were won by the server, including the first 13 of the tiebreak.

At 6-7 in the breaker, Kokkinakis netted a forehand which saw the Frenchman claim it after 57 minutes of high-class tennis from each side of the net.

The Australian had mis-hit two gettable returns when leading 2-1 in the tiebreak, which could have given him the opening he needed.

Across the entire tournament, both players had only been broken twice each, so opportunities were always likely to be few and far between.

The second set was almost a carbon copy, with both players dominating their serve for the most part.

However, in the latter stages of the set Rinderknech began to falter ever so slightly, with his first serve percentage dropping to 59 per cent. It gave the Australian a look for the first time all evening.

In the tiebreak, the forehand that had eluded Kokkinakis in the first set was firing on all cylinders as he started to punch holes in the world No.58’s defence.

Kokkinakis ramped up the aggression and was striking the ball beautifully, racing to 6-3 in the breaker and eventually closing it out with his third set point.

“Coming into that tiebreak I wanted to be aggressive. I stood back and decided ‘He’s going to have to beat me with pace’. I was thinking if I see a forehand, I’m going to go for it.”

Such was the serving power of both men, the match didn’t see a breakpoint opportunity until the opening game of the third set. It was Kokkinakis who swooped, riding the momentum as he landed a huge blow.

Holding to love in his next service game, Kokkinakis had victory in his sights at 2-0 and he simply refused to let go of his chance.

With composure and maturity befitting someone who had been there dozens of times before, Kokkinakis dropped just two points on serve for the entire set, breaking Rinderknech again in the ninth game to close out a famous victory.

Speaking after the win an emotional Kokkinakis thanked his family, coaches and supporters.

“What a ride it’s been. My family and my coaches, you guys have seen me at my lowest of lows and now my highest of highs. It’s been a journey and this is just the beginning.

“I feel like you guys in the crowd should have half of this trophy. You were unbelievable in every single match.”

Kokkinakis will eventually get the chance to celebrate a momentous occasion in his career, but for now he is on a plane to Melbourne because the Australian Open is calling.

Thanasi Kokkinakis is making up for lost time, and the rest of this story looks like being a special one.