With a chance to reach a first final since 2017, Thanasi Kokkinakis is taking nothing for granted in his return to top form in Adelaide. 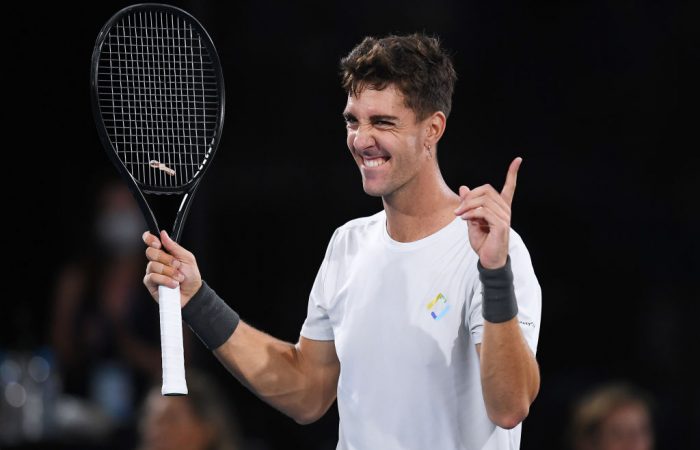 When Thanasi Kokkinakis took to the court last Friday night in Adelaide, it was his first semifinal at an ATP event in 1589 days.

He wouldn’t even check out of his hotel before getting another chance, just seven days later in the same city.

The resurgent 25-year-old charged into the last four of the Adelaide International 2 with a come-from-behind victory over fellow Australian Aleksandar Vukic last night.

Within reach of a maiden ATP title, Kokkinakis admitted he came close to not playing this week.

“After having a deep run last week, I wasn’t sure how I was going to pull up. I was in two minds: do I play this week or go to Melbourne and freshen up and get ready for the Australian Open?” Kokkinakis said after his quarterfinal victory.

“(But) I didn’t want to take these tour events for granted. I know how few and far between they were last year.”

Kokkinakis had to battle hard after losing the first set to Vukic, with frustration evident after he failed to capitalise on any of the nine break point chances he created in the opening set.

“I was counting them. If you actually go back to the match with John Isner in the previous round, I think it would have been 16 or 17 in a row,” he said.

“But I had to eventually let it go at some point. I had two more chances go by in the second, and I was thinking ‘there’s no way I should be losing this match’.

“I knew if I raised my level a little bit and played somewhat to my capabilities, the way the match was going, I’d be able to find it.”

Kokkinakis was able to refocus at the end of the first set, taking command of the contest from that point on in a 6-7(2) 6-3 6-2 victory.

After his well-documented injury troubles, Kokkinakis is feeling strong and healthy, despite his gruelling early season schedule.

“Honestly I’m feeling pretty good. I’m feeling a few things, but nothing serious. That’s what happens when you play at a high-level day in, day out,” he said.

“The main thing is my sleep is horrendous. I have trouble with getting to sleep, especially after late matches.

“My adrenaline is pumping … I’m not used to playing this many matches in two weeks, especially at this level.”

All class from Thanasi! 🙌🇦🇺

Kokkinakis’ top-100 return has long seemed assured, provided his body could stand up to the rigours of the tour.

But the current world No.145 is not allowing his mind to drift away from the present.

“I get reminded on Twitter here and there about where it’s at. You’re not really thinking ranking as you are playing. It’s going to take care of itself hopefully,” said the South Australian, who peaked at No.69 in 2015.

“You have to kind of set small goals for yourself, otherwise it can kind of cripple you. I think I was a victim of that a little bit last year. A lot of times I was like, I need this win. I wanted to get back to the top hundred so bad and as a result I wasn’t able to play to my level.”

His semifinal opponent in Adelaide is 2014 US Open champion and three-time Grand Slam finalist Marin Cilic, after the world No.29 defeated American Tommy Paul yesterday.

“I’m coming in with a lot more matches and probably a few more hours on the court,” Kokkinakis noted.

“I am not going to beat him by sitting back and waiting. I have to serve how I’ve been serving, and I need to have a better breakpoint conversion if I get those chances.”

The 33-year-old Croatian has a 12-5 record against Australians since 2012 and is facing Kokkinakis for the first time.

Kokkinakis is drawn to play a qualifier in the opening round of Australian Open 2022 which starts next week, with a potential meeting with 20-time Grand Slam champion Rafael Nadal in the second round.

First, though, there’s a chance to secure a first ATP-level final appearance since he was runner-up at Los Cobos in 2017.

Replicating that performance in his home city would be even more special.

“It’s massive,” Kokkinakis smiled. “I’m super stoked with my start to the year.”

Thanasi Kokkinakis meets No.4 seed  Marin Cilic in the second match tonight at The Drive in Adelaide. Play begins at 7.30pm AEST.