Australian wildcard Kimberly Birrell is one win away from snaring an Australian Open 2022 main draw spot. 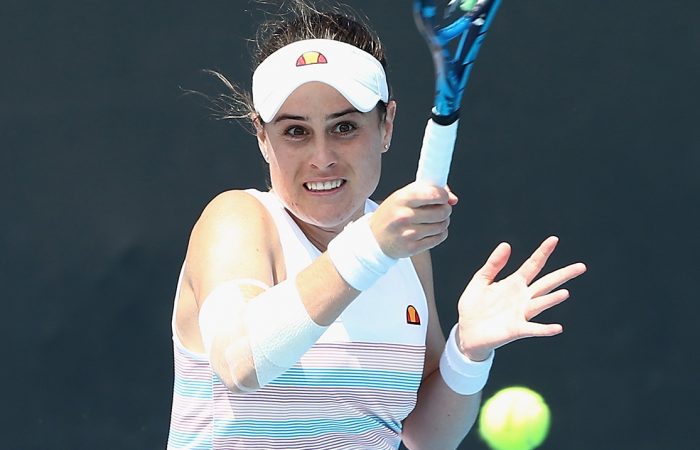 Perseverance is paying off for Australian Kimberly Birrell in this week’s Australian Open 2022 qualifying competition.

The 23-year-old wildcard has progressed to the final qualifying round and today plays Brit Harriet Dart for a main draw spot.

Birrell is contesting only her second tournament since February 2021 due to a struggle with a right elbow injury and the world No.664 admits she is already exceeding her own expectations.

“To even be playing, I’m just so grateful,” she said. “Each time I’m stepping out on court, I’m pinching myself.”

But after four tournaments, Birrell knew her elbow wasn’t quite ready for full-time competition.

“At the end of the day, I really want to have a long career,” she explained. “So I knew I had to take a bit of extra time.”

Birrell took the next 10 months off competing professionally, investing time into both her physical and mental health.

“Mentally to have so many setbacks with my elbow has been really tough,” said Birrell, whose best Grand Slam result is reaching the third round at Australian Open 2019.

“I took the time that I needed and now I’m ready to put my best foot forward.”

Despite her current positive outlook, Birrell concedes there were times last year when she “thought about giving up”.

“I wasn’t sure what I was going to do,” she said. “I was questioning a lot of things.”

Birrell is appreciative of a strong support network that encouraged her to keep chasing her tennis dreams, even when hope seemed lost.

“It has been really tough and I’m just super grateful for everyone who has believed in me,” she said.

When asked what qualifying for Australian Open 2022 would mean to her, the bubbly Birrell was lost for words.

“I’m not even sure if I can answer that question to be honest,” she said.

“I’m just really happy to be playing. After what I’ve been through this last couple of years, even just having a racquet in my hands means a lot.”

[WC] Kimberly Birrell (AUS) v [11] Harriet Dart (GBR)
Women’s qualifying singles, final round, Court 3, first match (from 10am AEDT)
Although Birrell is a Gold Coast local, she enjoys a home advantage at Melbourne Park. “I grew up on these courts basically, I’ve played so many nationals and showdowns here since I was 12 years old. I really do feel like I’m at home,” said the world No.664. Birrell is also familar with her final-round opponent Dart, a 25-year-old Brit ranked No.125. They have been friends since juniors and warmed up together before their second-round matches this week. “We both know each other’s games super well,” Birrell said. “I know she’s a really fierce competitor and never down and out. I’ll just have to put my best foot forward and see what happens.”
Head-to-head: First meeting