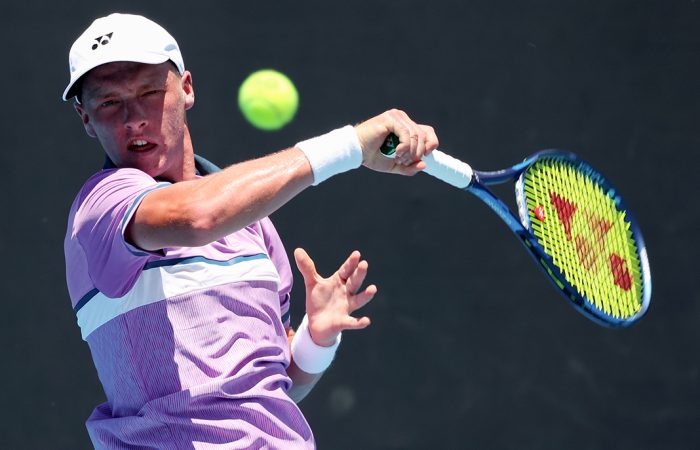 Edward Winter is not only a player on the rise, he’s also a young man with a mature head on his shoulders.

It is difficult to imagine juggling a burgeoning sporting career in the middle of a global pandemic, as well as trying to complete the most important phase of your school studies.

The 17-year-old Winter has been managing both with a level of maturity beyond his years, and in the process, setting himself up for future success on and off the court.

Reflecting on the past two years, Winter related that he used the challenging period for development in his game as he prepared to move from juniors to the open-age ranks.

“We try to look at every situation and make the best out of it, and I think we did that,” Winter said.

“We’ve tried to look at the last two years as a development phase for me. Try to get as much training in as I can with my fitness trainer and build that side of it, and with my coach Sam Wall.

“I’ve really been working on developing my game so that I’m prepared for the men’s game and that’s starting to pay off. In that sense, it has been a crucial two years for me.”

Winter scored the biggest win of his young career this week when he defeated former world No.6 Gilles Simon in the first round of the Australian Open 2022 qualifying competition, an impressive result for someone still at high school.

In his Grand Slam debut, 17-year-old Edward Winter defeats former world No.6 Gilles Simon in the opening round of #AO2022 qualifying 👊

“I’m going into year 12 at Immanuel College in Adelaide,” the world No.1768 related after his win on Tuesday. “They’ve been great over the last few years with me travelling a fair bit. They’ve set up an online program for me to function off and again they are happy to support me this year as well.

“They’ve been really helpful in allowing me to achieve my dreams.”

The grounded Winter won 20 of his 21 junior matches in 2021, including four consecutive titles. He described the UTR Pro Tennis Series events, held across Australia in 2020 and 2021, as especially valuable.

“Tennis Australia were great in putting on the UTR Pro Series for us, it kept the matches going and that was really important,” he said.

Winter is also feeding off the success of his fellow Australians, including 18-year-old Philip Sekulic who also claimed a debut Grand Slam win this week.

“It gave me the confidence that we can take these guys,” said Winter. “I think it’s really important that us Aussies stick together, especially here at home.”

Winter is taking a low-key approach to his own goals for this year.

“I’m just looking to improve each time I play,” he said. “We’ve got specific things we are working on, but I’m always trying to get better.”

Winter takes on Jesper De Jong of the Netherlands tomorrow in the second round of the Australian Open 2022 qualifying competition.