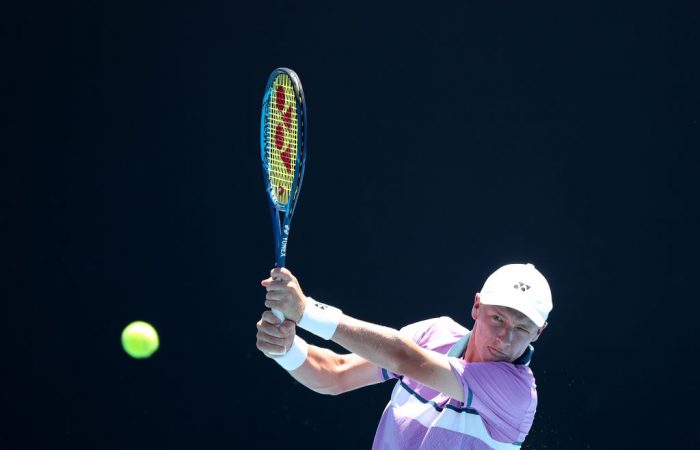 The 17-year-old South Australian produced the biggest win of his young career, defying a rankings gap of 1646 places as he downed veteran Frenchman Giles Simon in three sets.

Simon, a former world No.6 and two-time Grand Slam quarterfinalist, was stunned as the young Aussie peeled off the first three games of the match and never looked back, taking the opening set 6-3.

Simon fired back immediately as he controlled the second set from the opening point, taking it 6-1 and levelling the match.

Winter, though, refused to be intimated as the Frenchman’s challenged.

In the marathon fourth game of the decider, Winter held his nerve and put away an overhead at the net to land the key break of serve to lead 3-1.

This is how you make an #AusOpen debut ⬇️

“I’m really excited with the win; I think I played a really good match.” Winter said.

“I had the chance to watch Phil yesterday and that certainly inspired me a bit. It gave me the confidence that we can take these guys,” he said.

“I think it’s really important that us Aussies stick together, especially here at home.

“I’m just looking to improve, each time I play. We’ve got specific things we are working on, but I’m always trying to get better.”

Two years ago, Winter lost to Frenchman Giovanni Mpteshi Perricard in the opening round of the Australian Open boys’ event in three sets.

Fast forward to today and his win over one of that nation’s finest players of the past 25 years is a mark of his undeniable progress.

Marc Polmans was another Aussie to prevail on Day Two of qualifying, defeating Frenchman Geoffrey Blancaneaux 7-6(3) 6-2.

Polmans led 4-1 in the opening set before Blancaneaux charged back to level it 5-5 with some tremendous defence.

Polmans dominated the tiebreak and with that momentum he broke twice in a row in the second set to take control of the match.

The man who made legionnaires hats fashionable again is attempting to reach his fourth consecutive Australian Open main draw.

After a challenging 2021, Polmans is keen to make up for lost time.

“About a year ago I got my ranking to 137, I’m currently at 190, which means I’m in the challenger-level ranking. I’d love to get up around the career high mark again by this time next year,” he said post-match.

Ebden dropped the opening set 4-6 but dominated from that point on, winning 12 of the last 15 games in less than an hour.

The West Australian has reached the second round of the Australian Open on four previous occasions.

Meanwhile Akira Santillan fell in the opening round of qualifying, with Holland’s Jasper De Jong 7-5 4-6 3-6 winning their hard-fought battle.

Santillan grabbed an early break and served confidently throughout the opener, setting up a 5-4, 40-0 lead on serve.

De Jong responded and managed to break back but Santillan immediately broke again and held to love when presented with his second chance to serve it out.

Santillan struck 14 winners to three in a powerful display of ball striking in that first set.

In the second set, the Australian dropped serve early before immediately breaking back and squaring things up.

De Jong broke again in the 1oth game to push the contest to a deciding set. From there he took charge, controlling the majority of rallies and breaking serve again on his way to victory.

De Jong now faces Winter in the second round in what should be a terrific contest.

Cobolli served for the opening set at 5-4 but Harris lifted to land his first break of the match before the Italian eventually closed it out in a tiebreak.

Harris broke in the ninth game of the second set before confidently serving it out to love as he levelled a brilliant contest.

The third set saw Harris create most of the running in the early stages, but Cobolli hung in and landed the key break in the eighth game before closing it out 6-3 in the third.

Bernard Tomic exited to Roman Safiullin, with the Russian claiming a 6-1 6-4 victory.

Tristan Schoolkate battled hard against No.31 seed American Christopher Eubanks. Schoolkate was broken once in each set as Eubanks claimed a 6-3 6-4 victory.