Alex de Minaur has helped Team Australia record a thrilling 2-1 victory against Team France at the ATP Cup in Sydney. 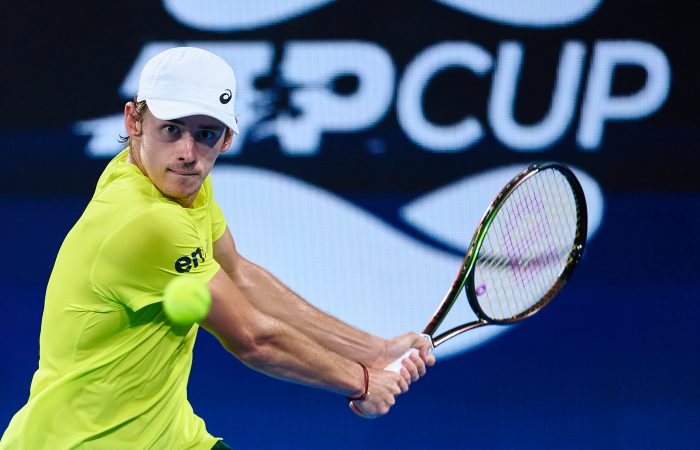 Team Australia has finished the ATP Cup in sensational style, fighting back from the brink of defeat to beat Team France.

A courageous comeback from Alex de Minaur spurred the Australians to a memorable 2-1 victory at Ken Rosewall Arena in Sydney this evening, with the spirited 22-year-old igniting a patriotic crowd with his efforts.

Arthur Rinderknech got Team France off to a promising start, posting a 6-4 7-6(6) victory against Team Australia’s James Duckworth.

The world No.58 dictated on serve throughout the one-hour and 53-minute battle, winning all of his service games and firing 12 aces.

Duckworth, the world No.48, did earn six break points – but couldn’t convert any.

World No.35 Ugo Humbert then made an impressive start in his singles showdown with De Minaur.

The crafty 23-year-old Frenchman was proving almost untouchable on serve – winning 75 per cent of first serve points and saving both break points he faced across the opening two sets.

“Ugo was playing some unbelievable tennis. He’s a very high-level player,” De Minaur admitted. “I just had to stick in there, keep pushing myself and get the crowd going.”

With a rapturous crowd willing De Minaur into the match, the hometown hero delivered.

The Australian stepped up to dominate a second-set tiebreak and riding this momentum, blitzed through the deciding set.

Conceding only a single point on serve in the final set, world No.34 De Minaur recorded a brilliant 3-6 7-6(2) 6-1 victory to force a deciding doubles rubber.

Peers and Saville, ranked world No.13 and No.23 respectively, held their nerves to defeat experienced French duo Fabrice Martin and Edouard Roger-Vasselin 6-2 5-7 [11-9].

The Aussies recovered from a 6-9 deficit in the match tiebreak, bravely saving three match points and winning the final five points in the 87-minute encounter.

“You have to try and roll the dice,” said Peers. “We played well in the first set, got a little unlucky in the second not to break and then they got the momentum. We snuck it at the end.”

The result sees Team Australia finish second in Group B. Defending champions Team Russia, led by world No.2 Daniil Medvedev, topped the group and now advance to the semifinals.