Embracing a fresh start in the new season, Jordan Thompson is also relishing the opportunities in the Australian summer of tennis. 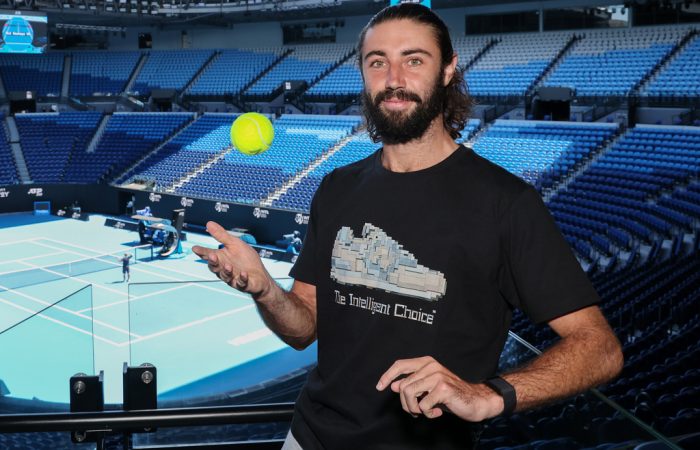 Many players would welcome the Grand Slam record that world No.75 Jordan Thompson has amassed over the past three seasons.

Within that period, he’s reached at least the third round of every major except the Australian Open.

Among Aussie men, only Nick Kyrgios and Alex de Minaur have won more Grand Slam matches since the start of 2019 than the understated Thompson.

The hard-working Sydneysider will be keen to match his recent exploits from abroad when the Australian Open gets underway this month.

“So I never put too much pressure or expectation on myself during the first few weeks of the year.

“Sometimes I’ve made a few quarters and won matches in every tournament and other times I haven’t won a match at all.”

Thompson, like many other Australian players, had to endure a gruelling period on the road in 2021, with COVID-19 protocols making it impossible for them to return home mid-season.

“I was away from home for 10 months, so just pulling into my home suburb and looking up and seeing the trees it really puts a smile on my face,” he reflected.

“I think I’ve spent eight months away before but never 10. And if I had played Davis Cup it would have been even longer.

“There’s no place like home. Just being able to see your family and see your friends again.”

A winning start for @jordanthommmo2 👊

Thompson believes the challenges of 2021 have built resilience among Australian players, who relish playing in home conditions.

“I realised how hard it is, especially for Australians, to be away all year,” said the 27-year-old.

“I don’t think many of the foreign players get that. You hear some of them complain and say ‘I’ve been away for four weeks’ it makes us think ‘gee you have it easy’.”

The thought of home crowds and warm weather put a smile on Thompson’s face as he looked to the coming weeks.

“It’s been 38 degrees and very windy but that’s the way us Aussies like it,” he said.

“Aussie crowds will be great, hopefully it’s back to normal and everyone is able to enjoy a good summer of tennis.”

Thompson reached the third round of Wimbledon in 2021, with victories over world No.14 Casper Ruud and former US Open finalist Kei Nishikori. He fell agonisingly short of a third-round appearance at the US Open after he held match points against Russian Aslan Karatsev.

Looking back on his season, Thompson was particularly proud of his stint in North America, where he reached the Newport semifinals and made consecutive quarterfinal runs at Los Cabos and Atlanta.

“That was definitely confidence-boosting, beating Nishikori in the second round at Wimbledon, and that was when I started to play a lot better on the grass and it carried on to the US,” he said.

“The season was a bit up and down. I had a really good stretch in the USA where I made a couple of quarters and a semi – I was a point away from the third round at the US Open and then I sort of fell away at the back end of the year.

“As the results fell away, I got COVID so it wasn’t the most pleasing end to the year. We’ll start afresh here in Australia.

“I lost a couple of kilos and wasn’t doing too much for a couple of weeks, but as soon as I got back to Australia I got right back into it and was training hard as usual.”

Last year, a neck injury forced Thompson’s withdrawal from his Australian Open first-round match against Ruud, and he admits the memory still lingers.

“It makes you a little worried about what could happen, but fingers crossed it doesn’t happen again and I’ll be fighting fit,” he said.

The signs were promising as Thompson recovered from a slow start to defeat countryman Chris O’Connell in the first round of the Melbourne Summer Set.

He takes confidence from that performance into today’s second-round clash with Finland’s Emil Ruusuvuori.

“I thought the level was quite good today,” said Thompson.  “Chris played a great first set, probably the best tennis I’ve seen him play, and unfortunately it was against me.

“I thought I played smart (and) a little bit more aggressive than usual.

“I competed hard. I felt like it was pretty good level all around, and never have to worry about me competing hard.”