A celebration of all the winners at the 2021 Australian Tennis Awards ... 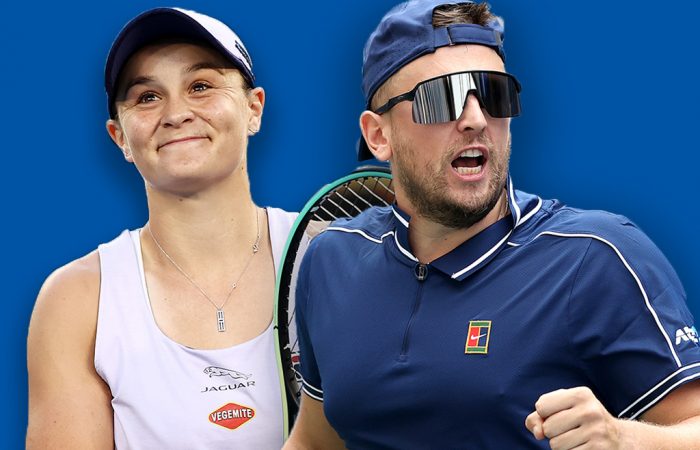 The annual Australian Tennis Awards are an opportunity to celebrate the achievements of our tennis community, both at a professional and grassroots level.

The 2021 awards were presented during a virtual ceremony this evening, with Dylan Alcott and Ash Barty sharing the coveted Newcombe Medal.

Congratulations to all award winners and finalists, your contributions to the sport are greatly appreciated.

Winners at the 2021 Australian Tennis Awards:

For the second time in the award’s history, there are joint winners of the coveted Newcombe Medal. Dylan Alcott was recognised for becoming the first male player to win a Golden Slam (claiming all four Grand Slam singles titles, plus a Paralympic gold medal, in the same calendar year), while Ash Barty was honoured for winning five titles in a stellar 2021 season, including becoming the third Australian to claim a ladies’ singles title at Wimbledon. It is the second time Alcott has won the prestigious award, matching his 2016 effort, while it is a record-making fourth Newcombe Medal for Barty.

Former professional and high-performance coach Louise Pleming is proudly demonstrating the ability of tennis to change lives and improve mental health through her RALLY4EVER foundation. Her dedication to provide tennis lessons for homeless and disadvantaged members of the community is creating more opportunities for all to participate and lifting community spirits in the process.

Congratulations Louise, this is a high honour and well deserved. Thank you for everything you are doing in the spirit of tennis. #Newks21 https://t.co/ZRKUwS6XvB

Willis has an active involvement in tennis, both as a volunteer administrator and a player. She has proudly represented Australia in senior events, is a dedicated Tennis Seniors ACT committee member and Vice-President at the Reid Tennis Club.

Busby, who is currently ranked inside the world’s top 10 in singles in both the 60+ and 65+ age groups, is a proud advocate of senior tennis and has captained Australia on multiple occasions at the Seniors World Team Championships.

Marafiote runs High Performance Tennis and is the head coach at the East Torrens Kensington Gardens Tennis Club in Adelaide. He works tirelessly to provide social and competitive opportunities for junior and senior players at the club, as well as attract new members.

Vogelsberger’s guidance and expertise proved invaluable as his charge, Dylan Alcott, became the first man in history to win a Golden Slam (claiming all four Grand Slam singles titles, plus Paralympic gold, in the same calendar year). This is the Melbourne-based coach’s first win in this category.

A six-time winner of this category at the Tennis SA Awards Night, this is Wall’s first national award. He is a club-based professional coach at the Coromandal Valley Tennis Club in Adelaide and works closely with several promising juniors, including Edward Winter.

Savic is a leading official who worked at all four Grand Slam tournaments in 2021, as well as at the Tokyo Olympics. He works as a chair umpire and line judge, is respected for his exceptional knowledge and enjoys mentoring and developing upcoming officials.

The 18-year-old from Queensland rose to world No.22 in the ITF junior rankings during 2021. Sekulic won more than 30 matches on the ITF World Junior Tour and made his junior Grand Slam debuts at Roland Garros, Wimbledon and the US Open. He also reached back-to-back ITF Future finals in India in November.

The annual Warrnambool Lawn Open celebrated its 70th anniversary in 2020, attracting 990 players to the seaside Victorian town. A proactive approach to attracting players and sponsors ensures the event continues to thrive and raise money that is invested back into the Warrnambool Lawn Tennis Club’s facilities.

Gould is Australia’s leading Down’s syndrome player. He is the world No.1 in the II-2 division and won the 2021 Australian Tennis Championships. He also enjoys assisting younger players and works as a volunteer assistant coach at the Queensland Tennis Centre.

Weekes won the 2021 Australian National Wheelchair Championships. The 37-year-old from Sydney finished the 2021 season ranked world No.25 in singles and world No.34 in doubles. He also created history at the Tokyo Paralympic Games, becoming the first wheelchair tennis player to represent Australia on five occasions.

Cobdogla Primary is a small rural school in South Australia’s Riverland region with 134 students. Tennis is a regular part of the school’s health and physical education curriculum. It is committed to promoting the sport, installing permanent ANZ Tennis Hot Shots mini-courts and a hitting wall to provide more opportunities for students to participate.

Located in the Melbourne suburb of South Yarra, the Fawkner Park Tennis Centre is managed by the Victoria Tennis Academy and aims to be a “community hub for anyone to come and play tennis”. The number of participants in junior programs has grown by 26 per cent in the past year, while adult participation is up 48 per cent.

Tektonopoulos is a dedicated Membership Co-ordinator at the Greenvale Tennis Club in Melbourne. She works closely with local schools, council and businesses to promote participation and has played a pivotal role in the club implementing ClubSpark software. She also manages the club’s social media accounts, runs the club’s canteen and helped design and organise club uniforms.