Ash Barty and Dylan Alcott are the toast of Australian tennis after sharing the coveted Newcombe Medal in 2021. 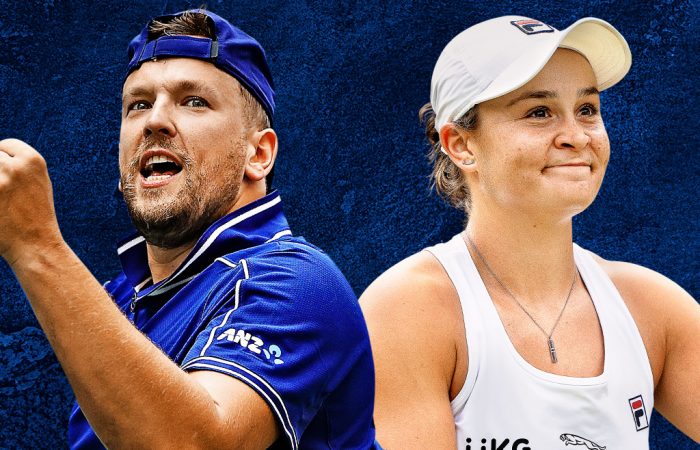 World No.1 Ash Barty and Golden Slam winner Dylan Alcott have both been awarded the prestigious Newcombe Medal at the 2021 Australian Tennis Awards tonight.

RALLY4EVER founder Louise Pleming was also recognised, receiving the Spirit of Tennis Award for her passionate commitment and service to tennis and the community, and her outstanding work in mental health.

Barty was presented with her record fourth consecutive Newcombe Medal, and accepted the award surrounded by family and friends in Brisbane during the online ceremony

The world No.1 commenced the 2021 season in spectacular fashion, winning the Yarra Valley Classic title at the Melbourne Summer Series and reaching the Australian Open quarterfinals.

The 25-year-old from Queensland continued her stellar run, scoring four top-15 wins to defend her Miami title and recorded three top-10 victories to triumph in Stuttgart.

In her first Olympic Games, Barty joined forces with John Peers in Tokyo to claim bronze in the mixed doubles event. It was Australia’s first-ever medal in mixed doubles.

Barty then won a tour-leading fifth title for 2021 at Cincinnati, before ending her season after a third-round exit at the US Open.

Barty secured the year-end world No.1 ranking for the third straight year, an accomplishment matched only by legends Steffi Graf, Martina Navratilova, Chris Evert and Serena Williams, and has now spent more than 100 weeks at the top of the WTA Tour rankings.

“I think of all the hard work that I’ve done with my team and all the work that we’ve done behind the scenes. It started with a massive pre-season last October.

“And, you know, we worked – we worked our backsides off all year to try and give myself a chance to try and compete day in day out against the best in the world and to be able to come through a lot of those matches and play a lot of matches means that typically you’re doing the right thing.

“It was an exceptional year across all surfaces. I felt really comfortable on all surfaces. This year I had success on all surfaces in all different conditions, which is a testament to Tyzz and all the work that I do with my physios and my strength conditioning coach off the court, to give my body a chance to go out there and play and do what I love to do. So it’s been a really rewarding year in that sense.

“We were able to stand up after we fell down and come back from injuries and come back through some really tough adversity, but it’s been a hell of a year.”

In what continues to be a golden year for Dylan Alcott, the Grand Slam Wheelchair Tennis champion and Paralympic gold medallist, was presented with his second Newcombe Medal award by Tennis Australia’s Head of Tennis Inclusion – Performance, Brenda Tierney.

Beginning the year with an Australian Open doubles victory and his seventh straight quad singles title at the tournament, Alcott added to his growing Grand Slam tally at Roland Garros, claiming his third singles title in Paris. He went on to win a second Wimbledon title in July, after defeating Sam Schroder in the final.

Winning the Paralympic gold in Tokyo edged the world No.1 closer again to the ‘Golden Slam’, and claiming a doubles silver medal with Heath Davidson capped off a memorable final Paralympics campaign.

Alcott etched his name into the history books at the US Open, becoming the first man to capture all four Grand Slams and Paralympic gold in a single season.

Alcott, who plans to retire after Australian Open 2022, finished the season as world No.1 in the quad singles division for the sixth time in his career.

“It’s awesome… I get lost for words to be honest,” Alcott said.

“You know, when I won a Newk [Newcombe Medal] in 2016 it was a massive moment. It was a real glass ceiling shattering moment because an athlete with a disability had never really won a big award like that, you know what I mean?  It’s kind of weird now but it feels a bit more normal, doesn’t it? And that’s so cool.

“And to share it with Ash who is one of my good mates but also just such a legend of a person – an even better person than she is a tennis player.

“Tennis Australia’s been such a big supporter of everything that I’ve done over the years and this is just a cherry on top of what’s been an incredible year…. It’s a super massive honour that’s for sure.”

The Newcombe Medal is the pinnacle award presented at the Australian Tennis Awards, which unites the sport’s players, coaches, clubs, communities, volunteers and officials across the country, in recognition and celebration for their service to the sport.

Hosted by Casey Dellacqua and Todd Woodbridge as a virtual gala ceremony, the 2021 Newcombe Medal, Australian Tennis Awards is the eleventh instalment of the coveted awards.

The Spirit of Tennis Award was presented to RALLY4EVER founder Louise Pleming, by good friend Jelena Dokic, who she has also coached.

The respected former player, coach and commentator was recognised for her dedication to and work on improving the wellbeing and mental health of homeless and disadvantaged communities through RALLY4EVER. Designed to connect people from all walks of life through tennis, the initiative is being implemented by clubs and coaches across the country.

“I am extremely humbled and honoured to be the recipient of the Spirit of Tennis Award,” Pleming said.

“Tennis has given me so much in my life and I just want to share that with everyone that needs a hand… What drives me is the laughter, love and social connection that this sport brings to our community. It doesn’t matter where you are in your life or where you have come from, mental health doesn’t discriminate and neither does RALLY4EVER. We are committed to breaking the barriers through our amazing sport”.

Named as dual recipients of the Most Outstanding Athlete with a Disability award, five-time Paralympian Ben Weekes and Australia’s No. 1 ranked II-2 player Timothy Gould were honoured for their outstanding contributions and achievements over the past 12 months.

The full list of award winners are as follows: