Barty in contention to claim a record fourth Newcombe Medal

Ash Barty has scored her fifth Newcombe Medal nomination. Winner of the prestigious award in 2017, 2018 and 2019, Barty has the chance to become the first player in history to claim four Newcombe Medals. 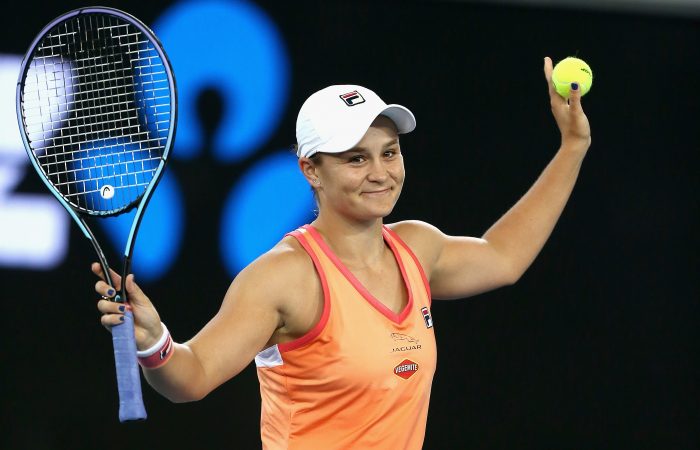 Given all that came before it, it is hard to believe that 2021 was a career-best season for world No.1 Ash Barty.

Thirteen events would produce five titles, including her historic Wimbledon triumph, where she became the first Australian to win the ladies’ singles championships the All England Club since her friend, mentor and tennis legend Evonne Goologong Cawley in 1980.

Barty’s season began in Melbourne when she defeated Garbine Muguruza to win the Yarra Valley Classic in early February, nearly 12 months since she had last taken the court.

Grateful to be doing what I love 💞 pic.twitter.com/wUaa4WyOQz

She would back this up with a run to the quarterfinals of the Australian Open, becoming the first Australian to make three consecutive last-eight appearances at the tournament since Wendy Turnbull in the early 1980s.

In early April, Barty won the coveted Miami Open by defeating 2019 US Open champion Bianca Andreescu in the final. She scored four top-20 victories, also overcoming Elina Svitolina, Aryna Sabalenka and Victoria Azarenka along the way, to defend her title.

From there the tour rolled onto clay, a surface Barty hadn’t played on since winning Roland Garros in 2019.

She began with a quarterfinal run at Charleston, before recording three top-10 wins to claim the Stuttgart title.

Barty was also a finalist in Madrid, where Sabalenka turned the tables from their Stuttgart final to secure the trophy.

“I’ve had my fair share of tears this week. It’s all good. Everything happens for a reason,” the typically level-headed Barty said after withdrawing in the second round at Paris.

“There will be a silver lining in this eventually. Once I find out what that is, it’ll make me feel a little bit better. But it will be there, I’m sure.”

She wouldn’t have to wait long for that silver lining to appear.

With no chance to compete in lead-up tournaments due to injury, Barty’s next appearance was at Wimbledon.

After winning a three-set battle against Spanish veteran Carla Suarez Navarro in the opening round, Barty found top gear. She did not lose a set in her next five matches, scoring powerful victories over Roland Garros champion Barbora Krejcikova, Aussie Alja Tomljanovic and three-time Grand Slam champion Angelique Kerber in an impressive run.

The final was one of the great moments in Australian tennis, with Barty riding a rollercoaster of momentum to triumph 6-3 6-7(4) 6-3 against Czech Karolina Pliskova and claim her second Grand Slam singles title.

In her post-match press conference, Barty revealed how close she came to not even competing.

“There weren’t too many radiologists in Australia who had seen my injury. In a sense, it was a two-month injury. Being able to play here at Wimbledon was nothing short of a miracle,” she revealed.

After exiting in the opening round in singles in her Olympic Games debut, Barty teamed with John Peers to claim a bronze medal in mixed doubles and reach the women’s doubles quarterfinals with Storm Sanders.

Barty continued her winning run at Cincinnati, becoming the first Australian woman in 48 years to capture the singles title.

The 25-year-old ended her stellar season after a third-round exit to American Shelby Rogers at the US Open.

She finished the year with a 42-8 win-loss record in singles and won 14 of her 15 matches against top 20-ranked opponents. This effort helped Barty secure her third consecutive year-end No.1 finish, becoming only the fifth woman to achieve the feat after Chris Evert, Martina Navratilova, Steffi Graf and Serena Williams.

Her total weeks at the top of the WTA Tour rankings now exceed 100 and she is currently enjoying the fifth longest reign in tour history.

Barty opted not to defend her WTA Finals title last month, choosing to instead focus on her preparations for the Australian summer.

“It was a difficult decision but I need to prioritise my body and my recovery from our 2021 season and focus on having the strongest pre-season for the Australian summer,” said Barty, who recently became engaged to long-time partner Garry Kissick.

“I can’t wait to play at home again.”

Yet there could still be another accolade to celebrate in 2021, with Barty nominated for the coveted Newcombe Medal.

“I feel honoured to be nominated,” Barty said.

“I’m proud of the year my team and I have had and the work we put in. To be recognised by the Australian tennis community with this nomination is special.”

Barty is one of four nominees for the prestigious Newcombe Medal in 2021, the highest individual honour in Australian tennis. She is nominated alongside Dylan Alcott, John Peers and Sam Stosur. The winner will be announced at the Australian Tennis Awards on Friday 17 December.