United by Play: Australian Open 2022 to bring back big crowds

The countdown is on to Australian Open 2022, where full crowds will be welcome to watch the world's best players compete for Grand Slam glory. 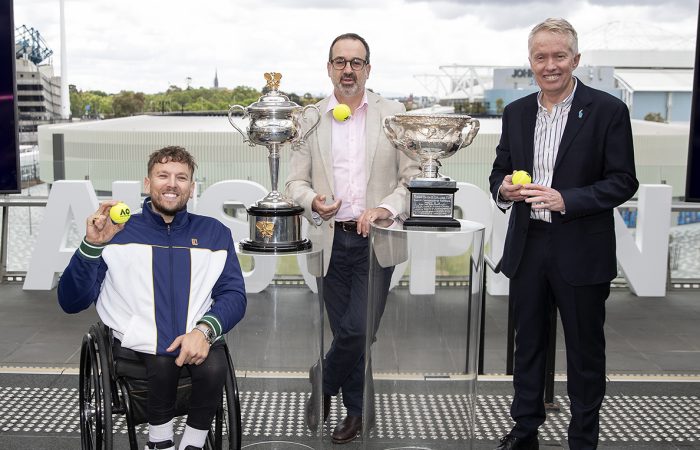 The Australian Open will help Melbourne roar back to life in January 2022, signalling to the world that the city and the state of Victoria is back and open for business.

Bumper crowds are expected to flock to Melbourne Park in January, where they will be treated to a full Grand Slam program that includes two weeks of lead-in tournaments, the return of qualifying and the AO Junior Championships.

Record crowds are expected for the AO Wheelchair Championships, as multi-Grand Slam champion and Paralympic gold medallist Dylan Alcott plays in his final tournament before retiring from the sport.

The brand new 5,000-seat stadium and a stunning new dining precinct, along with media facilities and broadcast studios will be unveiled, revealing the final stage of the 10-year redevelopment of Melbourne Park which continues to lead the way in global Grand Slam facilities.

The Happy Slam is coming back in a big way 🚀#AusOpen 🔜 #AO2022 pic.twitter.com/xJOKmGeWhW

“The Australian Open will be back in all its glory in January and provide a massive boost to the city, the state and the country as it plays a major role in helping Melbourne roar back to life,” said Tournament Director Craig Tiley at today’s official launch.

“We can’t wait to welcome back the world’s best players. They love competing here in Melbourne, experiencing the warmth and enthusiasm of the fans, enjoying our beautiful city and player facilities unlike anywhere else in the world.

“It’s also very special to go into the summer of tennis with an Aussie reigning supreme as the world No.1. Ash Barty has made it very clear she’s looking forward to the AO and she wants to do well in Melbourne. She’s just starting her pre-season and she’s fit, healthy and raring to go.

“Even though it’s been a tough year for so many of our Aussie players, who’ve spent the whole year on the road or gone through multiple rounds of hotel quarantine, they’ve shown remarkable resilience and achieved some outstanding results.

“Ajla Tomljanovic has had a great year and is back in the top 50 after reaching the quarterfinals at Wimbledon. Sam Stosur won the US Open doubles, her eighth Grand Slam title. Storm Sanders reached the semifinals in the doubles at Wimbledon and was a star at the recent Billie Jean King Cup, where it was also great to see Daria Gavrilova back on court after a long injury time-out.

“The men have also reached new heights in 2021 with Alex de Minaur reaching his career-high ranking after winning two ATP titles this year and Alexei Popyrin claiming his maiden title. James Duckworth, John Millman, Max Purcell and John Peers all achieved new milestones. I have no doubt all of our Aussie players will be greeted by rapturous crowds at their home Slam.

“We can’t wait to welcome back the world’s best players, and our fans in big numbers, with all the fun and excitement of live sport in summer in Melbourne.”

In 2022, the Australian Open celebrates 100 years of women’s competition at the highest level of the sport.

The first champion, Margaret Molesworth (NSW) who won the inaugural women’s Australian Championships singles title in 1922 and again in 1923, along with three-time winner during the 1930s, Joan Hartigan (NSW), will be inducted into the Australian Tennis Hall of Fame.

Both women were acknowledged as being among the world’s top 10 during their careers, a significant achievement when so few women were able to compete at a high level in any sport. Molesworth was Australia’s first female professional tennis coach, and both contributed to the sport, inspiring more girls and women to take up tennis.

The women’s semifinal will move to prime time in 2022, with both matches to be played in the night session on Thursday 27 January, in a major shift to the schedule.

This also means the men’s semifinals will now be played on the Friday in a day and a night session, instead of being split across two nights.

There will be more exciting activations for fans than ever before, with the introduction of the spectacular new AO Beach House, designed to bring the laid-back holiday vibes to life within a stunning new precinct. Beach Tennis, Piper Heidsieck Cabanas, Grainshaker Australian Vodka Bar, gourmet fish and chips from Pipi’s Kiosk and a range of health and wellness activities offer something for everyone and will attracted both the early birds and the night owls.

Grand Slam Oval is back bigger than ever and will showcase all that we love about the laneways of Melbourne. Ten of the most celebrated CBD restaurants will serve up their signature dishes from an eclectic mix of cuisines.

Rockpool Bar & Grill offering spectacular indoor and alfresco dining, with an exclusive contribution to the menu by Burnt Ends, ranked No.34 in the World’s Best Restaurants. Famed Singapore-based Australian chef Dave Pynt says contributing the Rockpool menu is the perfect alignment of two like-minded restaurants and a unique opportunity to work with his respected peer Corey Costelloe from the iconic Rockpool brand.

As #AusOpen tickets go on sale at 12 pm AEDT today, the biggest names from Melbourne’s world-class restaurant scene are set to showcase the diversity, innovation and strength of the local industry 🔥

The new dining precinct is also host to the Penfolds Restaurant, a four-course fine-dining experience; the more casual Penfolds Bistro and the extravagantly luxurious and perfectly pink Max’s Rosé Bar, on the terrace overlooking Garden Square.

The lush greenhouse surrounds of Atrium Eatery and Bar by Ben Shewry of Attica fame will be an oasis in the midst of the AO energy. Located on the River Terrace overlooking the Yarra, there will be native botanicals-inspired cocktails curated by pioneering mixologist Michael Madrusan, and influences of sustainable design throughout the space.

> Australian Open tickets are now on sale via Ticketmaster