Storm Sanders has recorded the biggest win of her singles career, beating world No.18 Elise Mertens in her Billie Jean King Cup debut. 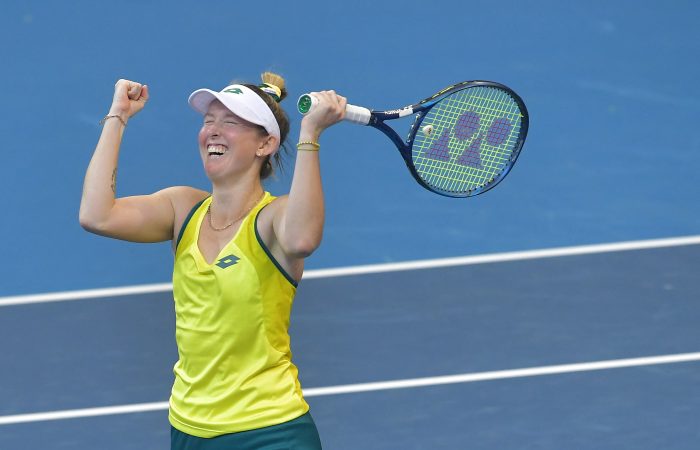 Storm Sanders has scored the biggest singles win of her career, upsetting world No.18 Elise Mertens in a three-set contest at the Billie Jean King Cup Finals.

“It feels absolutely amazing,” Sanders said. “I knew it was a tough ask coming out and playing Mertens, but I’ve played her before and definitely felt like I knew her game.

“We had a good game plan, which I went out and executed. To have the team on the sidelines was an awesome feeling and even though I lost the first set, I still felt like I was in control and doing all the right things. It’s incredible to get the win.”

The left-handed Sanders blitzed through the final set, hitting 11 winners to two to emphatically clinch a memorable victory.

“I don’t think I’ve ever played a set that well in my life,” she beamed after the match. “I don’t think I made many unforced errors and was definitely hitting the ball well. I was just enjoying it and having fun out there.”

On her #BJKCup debut, Storm Sanders records one of the results of her career to win the tie for @TennisAustralia #BJKCupFinals pic.twitter.com/KAqcTWUw39

The world No.131 hit 35 winners in total to record her third career victory against a top 50-ranked opponent – and first against a top-20 player.

“To do it in this moment, representing Australia, it is just the best feeling ever,” Sanders said.

Belgium ended the tie on a positive note. With Mertens, the world’s top-ranked doubles player, and Minnen teaming up to clinch the doubles rubber with a 6-2 6-4 victory against Sanders and debutante Ellen Perez.

Australia now plays Belarus in its second round-robin tie on Thursday, needing victory to earn a place in the knockout semifinals.