Aussie mates ready to challenge for US Open title

Australians Heath Davidson and Dylan Alcott play for the US Open 2021 quad wheelchair doubles title on day 13 in New York. 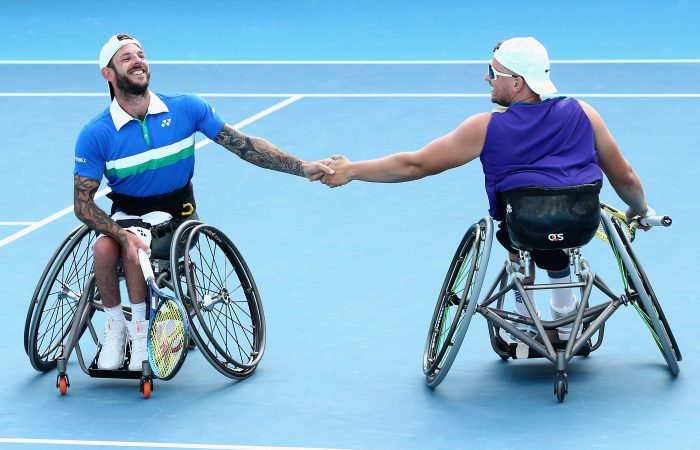 The spotlight is shining brightly on Australian superstar Dylan Alcott in New York this week.

The world No.1 is attempting to become the first man in history to achieve a Golden Slam, having already swept singles titles at the Australian Open, Roland Garros, Wimbledon and Paralympic Games this season.

The 30-year-old Alcott is now through to the US Open semifinals – and just two wins away from achieving the remarkable feat.

Yet that is not the only goal for Alcott this week, who is also trying to win a third consecutive US Open quad wheelchair doubles title.

Winning this year would be extra special too, as Alcott is partnering close friend Heath Davidson for the first time in New York.

The duo, who have won four Australian Open titles together, have progressed to a final showdown with Dutch duo Niels Vink and Sam Schroder.

It is a rematch of last week’s Paralympic Games gold medal match, where Alcott and Davidson received the silver medal.

As history beckons and external pressures mount, Alcott is trying not to focus too much on adding to his Grand Slam tally.

“I used to have expectations of myself to win. You can have a goal to win, but the only expectation you can have is to be the best version of you. That’s all you can worry about,” he eloquently explained during the recent Paralympic Games.

Aussies in action on day 13:

[1] Dylan Alcott (AUS) v Koji Sugeno (JPN)
Quad wheelchair singles, semifinals, Louis Armstrong Stadium, first match (from 2am AEST)
The 30-year-old Alcott is aiming to reach a fourth consecutive singles final – and his fifth in total – in New York. This is his second Grand Slam meeting with 40-year-old Sugeno. The top-ranked Australian defeated the Japanese player in the Wimbledon 2019 semifinals, one of his eight career victories against the world No.6. Alcott has only lost a single set across all of their previous matches, which was in the Japan Open semifinals in 2019. They clashed in this year’s US Open doubles semifinals as well, with Aussie duo Alcott and Davidson scoring a comfortable victory.
Head-to-head record: Alcott leads 8-0
Last meeting: Alcott won 6-0 6-2 (Biot, June 2021)

[1] Dylan Alcott (AUS)/Heath Davidson (AUS) v Sam Schroder (NED)/Niels Vink (NED)
Quad wheelchair doubles, final, Louis Armstrong Stadium, third match
Alcott and Schroder were doubles partners at Roland Garros and Wimbledon this year – but at the US Open, they are facing-off for the title. The Dutch duo of 21-year-old Schroder and 18-year-old Vink have won their past two meetings against world No.1 Alcott and world No.4 Davidson, including in the Paralympic Games gold medal match in Tokyo last week. World No.6 Schroder is aiming to win his second major doubles title, while world No.5 Vink is playing in his first final at this level. Alcott is targeting a ninth Grand Slam doubles title and 34-year-old Davidson is looking to claim his fifth.
Head-to-head record: Schroder/Vink lead 3-2
Last meeting: Schroder/Vink won 6-4 6-3 (Paralympic Games, September 2021)