US Open 2021: Aussies set for quarterfinal battle on day nine

There are seven Australians in action on day nine at the US Open, including Storm Sanders and Sam Stosur going head-to-head in the women's doubles quarterfinals. 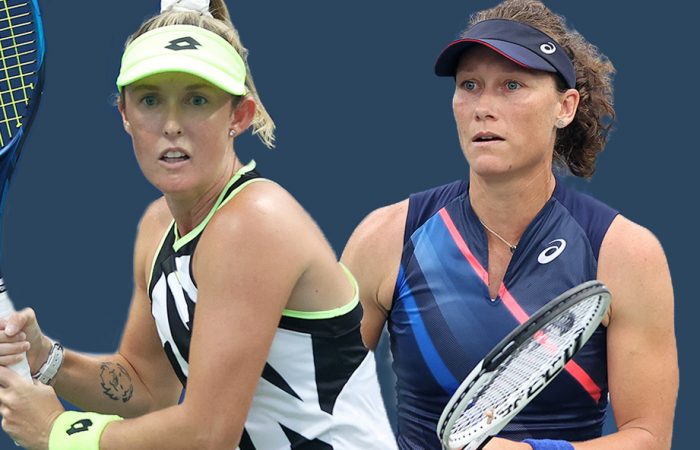 Two Australians are set to go head-to-head in a US Open women’s doubles quarterfinal for the first time since 2005.

Storm Sanders and American partner Caroline Dolehide play Sam Stosur and China’s Zhang Shuai for a place in the semifinals on day nine in New York.

The last time this happened, Stosur and American Lisa Raymond defeated Rennae Stubbs (who is now Stosur’s coach) and Zimbabwe’s Cara Black in the quarterfinals during their title-winning run.

With the 37-year-old Stosur still challenging for major titles 16 years later, it highlights her incredible longevity.

The all-Australian showdown is one of fives matches featuring Aussies players on day nine in New York.

Aussies in action on day nine:

[Alt] Ellen Perez (AUS)/Marcelo Demoliner (BRA) v Giuliana Olmos (MEX)/Marcelo Arevalo (ESA)
Mixed doubles, quarterfinals, Louis Armstrong Stadium, first match (from 1am AEST)
Perez and 32-year-old Brazilian Demoliner have made the most of an alternate spot in the mixed doubles draw, advancing to the quarterfinals. This is a career-best Grand Slam effort for 25-year-old Perez, who is ranked No.46. To reach a first major semifinal, Perez and No.51-ranked Demoliner need to defeat Olmos, a 28-year-old from Mexico ranked No.24, and Arevalo, a 30-year-old from El Salvador ranked No.36. Their opponents are also enjoying a career-best run in New York and eliminated the top seeds in the second round.

[10] Storm Sanders (AUS)/Caroline Dolehide (USA) v [14] Sam Stosur (AUS)/Zhang Shuai (CHN)
Women’s doubles, quarterfinals, Louis Armstrong Stadium, second match
This is world No.55-ranked Stosur’s sixth US Open quarterfinal appearance, while No.41 Sanders is making her first. Both of their partnerships carry momentum into this match-up too. Stosur, who boasts an unbeaten record in US Open quarterfinal matches, and Zhang are on an eight-match winning streak after scooping the Cincinnati title last month. While, Sanders and Dolehide have won 10 of their 12 matches since teaming up for the first time in June. The Australians train together in Melbourne and know each other well. They have met on the doubles court three times before at tour-level, including twice this year. Sanders has won both of their 2021 meetings.

Max Purcell (AUS)/Matthew Ebden (AUS) v [4] Rajeev Ram (USA)/Joe Salisbury (GBR)
Men’s doubles, quarterfinals, Grandstand, third match (not before 5am AEST)
Enjoying a career-best run in New York, 23-year-old Purcell and 33-year-old Ebden now play for a place in the semifinals. World No.42 Purcell was a semifinalist at Australian Open 2020, while world No.69 Ebden is hoping to reach that stage in a Grand Slam men’s doubles draw for a first time. Yet to lose a set this tournament, the Australian combination face world No.6 Salisbury and world No.7 Ram in the quarterfinals. The fourth-seeded duo were the Australian Open 2020 champions and also won the Toronto title last month.

[8] John Peers (AUS)/Filip Polasek (SVK) v [3] Pierre-Hugues Herbert (FRA)/Nicolas Mahut (FRA)
Men’s doubles, quarterfinals, Court 17, third match (not before 5am AEST)
Peers has progressed to a US Open men’s doubles quarterfinal for the fourth time in his career and is enjoying his best run in New York since making the 2017 semifinals. The 33-year-old Australian, who is ranked No.25 and playing in his first Grand Slam quarterfinal in two years, is contesting a fourth tournament alongside world No.14-ranked Polasek. The newly-formed team face an accomplished duo in the quarterfinals. World No.3 Mahut and world No.9 Herbert have won five Grand Slam titles as a team, including the US Open in 2015.

Philip Sekulic (AUS) v [6] Victor Lilov (USA)
Boys’ singles, second round, Court 10, second match
Sekulic has won 13 of his past 15 matches on the ITF Junior World Tennis Tour and advanced to the second round in a Grand Slam tournament for the first time in his career, providing the 18-year-old from Queensland with plenty of reasons to feel confident. Although, the world No.55 faces a big task in the second round. The sole Australian representative in the draw plays sixth-seeded American Victor Lilov, who is ranked No.9 and was a finalist in the Wimbledon boys’ singles competition in July. This is their first career meeting.

HOW TO WATCH: The US Open 2021 tournament is broadcast on Foxtel and Kayo Sports in Australia, as well as SBS on free-to-air television from today onwards.